There is immense promise in it. It is rechargeable, non-toxic and flexible. It is the new plastic battery 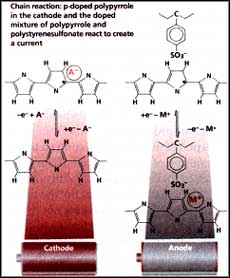 A VISIT to a factory that manufactures batteries is riot a very pleasant experience. A factory manufacturing lithium batteries uses electrodes made from lithium and manganese dioxide (mo) Which are used to run anything from wristwatches to camcorders. Lithium reacts explosively with water, therefore the humidity in the factory must be carefully controlled. mo being extremely fine is not supportive either. Though MO dust is not toxic and is bound together with a resin, it gets everywhere. Workers wear masks to prevent inhaling these particles and must take long breaks when they can breathe normally.

There are other kinds, like mercury batteries for watches, lead-acid cells for starter motors in cars, and nickle-cadmium batteries that can be recharged and used in anything from torches to calculators. All contain toxic metals and handling them safely adds enormously to the cost of manufacture. Dead batteries have been dumped in landfill sites and have caused serious contamination in the past.

Now an option is coming up. "There is nothing toxic in our batteries," says Jo Suter, a materials scientist at the applied physics laboratory, part of Johns Hopkins University in Maryland, us. Suter is developing the world's first all-plastic battery. He says that the components are non-toxic, making the batteries easy to manufacture and dispose off safely. They can be recycled to make new batteries. Although it is too early to predict anything, battery makers are queuing up to take a look. Not just for environmental benefits, but manufacturers are interested in knowing the amount of energy that can be packed into a cell, its operating temperatures, the voltage it can produce, whether it can be recharged and how often. And the main reason for all this, interest is the fact that plastic batteries have the potential to outperform man), existing cells. With all this there is another advantage of flexibility. These batteries can be moulded into unusual shapes to form part of the structure or casing of hearing aids, personal stereos and body computers.

The science involved is quite complex. A simple battery consists of two electrodes made from materials that exchange ions and electrons. The trick is to allow the ions to pass through the battery while forcing the electrons to pass round an external circuit where they power anything from a mobile phone to a laptop. This is done by providing a medium, called electrolyte, for the exchange of ions. The medium is usually a salt solution.

Both the electrodes perform a diametrically opposite 'job. The electron producing electrode is known as the anode. Metals perform this job perfectly and there are few commercial batteries that have ever used anything else. The other electrode, cathode, performs the job of accepting the electrons at the end of their journey. Cathodes have been made from a variety of materials including metals, metal oxides and metal sulphides.

Although plastics are great insulators, it has been known for nearly two decades that some plastics conduct electricity. These conducting plastics consist of long chains of carbon atoms joined by alternating single and double bonds. These polymers are made to conduct electricity by doping them with other chemicals. To understand how these materials conduct electricity, take a look at a gridlocked traffic where nothing can move because there is no space. Imagine looking down on such a city and remove a single car from the jam below. The car behind moves into this space, thereby creating room for another car to take its place, and so on. While the traffic moves forward, the hole created by the removal of the car travels backwards against the flow.

A similar effect occurs when a polymer is doped. Take the backbone of a polypyrrole chain, which is essentially a series of carbon rings in which the atoms are joined by alternating single and double bonds. The dopant, an oxidising agent, binds to the polypyrrole molecule and removes an electron in the process. This allows an electron from the neighbouring pyrrole ring to jump into its place, leaving behind a 'hole' for an electron from the next ring, and so on. The 'hole' created by the leaping electrons moves in the opposite direction acting as a positive charge, and so this kind of a doping is known as positive or p-doping. The material on the whole remains neutral. P-doped polymers are ideal cathodes.

Electronic gridlock can also be broken in another way - by adding an electron to the polypyrrole backbone via a reducing agent such as lithium. This creates a positively charged lithium ion and a negatively charged backbone. Because this negative charge moves along the backbone, this process is known as n-doping. In theory, n-doped polymers should react with p-doped polymers in a reversible process that creates a flow of charge -- an ideal rechargeable battery. But until now nobody has come up with an n-doped polymer that works.

In comes Peter Searson and his colleague Ted Poehler at the main Johns Hopkins campus in Baltimore, who head a small team of materials scientists and chemists. "The trouble with most conducting polymers is that the backbone becomes unstable when you try to add an electron," says Searson. While Suter is working to develop plastic batteries for commercial applications, Searson and Poehler have carried out the basic research that is ma4ing it possible. In the beginning of the year, the two researchers synthesised a stable, n- doped polymer from a class of plastics known as polythiophene, but have shied from giving any details before patents have been filed.

In July, the team produced the first all-plastic battery using the new anode. Suter says the cell's energy density is around 45 watt-hours per kilogram and can be improved. Thg only drawback is that the battery loses charge at the rate of two per cent per week as compared to less than 0.2 per cent in the case of commercial batteries. The team is working on why the self di9charge rate is so high.

The next stage is to find an industrial backer to develop the battery for manufacture. In the long run, both Suter and Searson are optimistic about plastic batteries. "In future, there will be no way that landfill sites will accept the batteries that are on the market today," Suter says (New Scientist, Vol 152, No 2058).