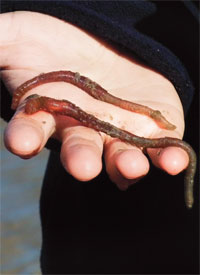 PLASTIC pollution in oceans is a growing problem. Over time, movement of waves and exposure to the sun breaks the material into tiny particles called microplastics which harm even the smallest oceanic organisms. Two studies published in the journal Current Biology on December 2 examined the effects of microplastics on lugworms, which are a source of food for fish and birds and play an important role in nutrient recycling.

One of the studies found that lugworms are up to 50 per cent less energetic if ocean sediments contain significant amounts of microplastics. This had a serious effect on their growth and reproduction. The researchers, led by Stephanie L Wright from the College of Life and Environmental Sciences, University of Exeter, UK, exposed worms to sediments containing various amounts of plastic contaminants for short and long periods and found that not only did the worms eat less, but microplastics also got retained in their gut, slowing the process of digestion. If marine worms eat less and have low energy levels, it leads to a drastic decrease in turnover of organic content in sediments, which adversely impacts nutrient recycling.

The second study showed that when lugworms were exposed to sand with 5 per cent of microplastic (containing pollutants and additive chemicals), the chemicals got deposited in their gut tissues and took a long time to break down. ThisÃ”Ã‡Ãªbrought down their immunity levels and reduced their ability to add organic content to sediments. It also made them susceptible to oxidative stress and even death.

The study was done by Mark Anthony Browne from the School of Marine Science and Engineering, Plymouth University, UK. “The best way to deal with plastic debris is to stop the waste from entering the ocean in the first place: to replace, reduce, reuse and recycle our plastics,” says S Bijoy Nandan, associate professor at the department of marine biology, Cochin University of Science and Technology, India.

William J Cooper, professor at the department of Civil and Environmental Engineering, and director of the Urban Water Research Center, University of California, US, says, “Plastic pollution may or may not have a direct tie to human health, but these studies have shown that it is harmful to these polychaete worms which are an essential part of the ‘mud’ ecosystem.”

Browne’s study also said that 33 billion tonnes of plastic would be added to the planet by the year 2050.