Ploughing on in Punjab

How successful will the state's crop deversification scheme be? 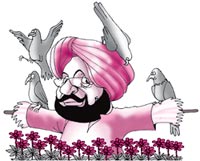 ever since Punjab chief minister (cm) Amarinder Singh's performance was rated highly by a popular weekly magazine in August, the state government has gone into a public relations overdrive. One of the main successes, it has claimed in full-page advertisements placed in national dailies, is the diversification of the state's ailing agriculture sector. The fact is that even as Punjab implements the crop diversification scheme, reaping a rich harvest from it will be much tougher than anticipated.

It is now more than eight months since the local administration announced a contract farming system to wean farmers off the wheat-rice cropping pattern and reduce their dependence on government procurement. The wheat-rice cycle may have filled India's granaries, but it has taken its toll on Punjab's soil and water resources.

One of the major contract farming programmes covers 16,600 hectares (ha) of land that was earlier under paddy. Basmati is now being cultivated on the tract. But isn't it as water-intensive as paddy? "Basmati is planted around July 10, by which time the monsoon arrives. This means there is no additional strain on the groundwater," points out Jagjit Singh Hara, a Ludhiana-based farmer. The contract has been taken up by the Escorts Agri Machinery group, which will sell the product to three rice exporting companies.

In case the exporters fail to purchase the produce, the Punjab Agro Industries Corporation (paic) -- the nodal agency for the crop diversification programme -- will buy it at a "comfort price", explains Gokul Patnaik, president of GrainTec, a rice milling firm which is providing Escorts extension services for the venture. These include input finance and collections, procurement, storage, bulk processing and distribution. The farmers would be charged a fee for such facilities. The Escorts programme already has 3,000 members. Plans are being chalked out to branch out into crops like wheat and white mustard during the next season, reveals Patnaik.

Herein lies the biggest challenge. Hara feels that earlier contract farming efforts relating to mustard failed because of paic's ill-directed moves. "They got seeds suited to southern India. The problem with the corporation is that it is run by bureaucrats," laments Hara, adding that the agriculture university should steer the project.

Contract farming is just one component of the Punjab government's overall crop diversification plan. This segment is driven by a report entitled 'Agricultural Production Pattern Adjustment Programme in Punjab for Productivity and Growth'. The cm's advisory committee on agriculture policy and restructuring, headed by economist Sardara Singh Johl, prepared the document. The panel warns: "Unless we improve the cost-effectiveness of our agricultural products and become competitive in the international market on the strength of ... price and quality, the future of agriculture in Punjab is in danger."

The centrepiece of the committee's recommendations is the proposal to move away from rice-wheat rotation, and formulate a plan to compensate farmers for the money they would lose in not growing these crops. This would reduce rice-wheat cultivation by 30 per cent, allowing the Union government to save about Rs 9,000 crore in procurement, handling and storage costs. The committee has estimated that the compensation to farmers in lieu of this would amount to Rs 1280 crore.

Johl elaborates on the rationale of the suggestion: "The government is buying rice and wheat at minimum support prices and exporting foodgrain to offset losses. The amount the government saves can be paid to farmers as compensation. They in turn can grow crops like oilseeds and legumes, for which we are heavily reliant on imports." He insists that such a relief would not amount to a subsidy.

But the roadmap prepared by the panel has hit a hurdle: the Planning Commission has not accepted it. The Congress-run state government alleges that the Bharatiya Janata Party-led Union government has not doled out the Rs 1,280-crore amount because of political reasons. Farmers such as Hara, however, argue that the compensation would only promote inefficiency.

The state government has vowed to go ahead with crop diversification whether or not the Centre provides the funds. What will determine its success or failure? "It will work if it is driven by the market, not if it is a government programme," opines Patnaik, who was also on the advisory committee. Summing up, he says: "It is economically viable, though I don't know if it is politically feasible."