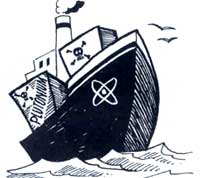 ALL IS not shipshape at Japan's dry dock. Recently, six Greenpeace activists, protesting the first shipment of one tonne of plutonium from France to Japan, were arrested by the Japanese government. The plutonium will fuel Japan's future fast-breeder nuclear power programme. The protestors pointed out the vulnerability of carrying the hazardous material by ship in view of terrorist threats or an accident. South Africa has joined the protest asking the Japanese to ensure the loaded ship does not pass within 200 miles of its coast.