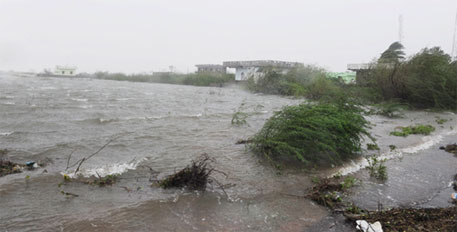 In his latest tweet on social media website, Twitter, Prime Minister Narendra Modi has announced that he will visit the city of Visakhapatnam – which was hit by Cyclone Hudhud a day earlier – on Tuesday.

Modi tweeted, “Have been constantly taking updates on Cyclone Hudhud. Spoke to AP CM. Will visit Visakhapatnam tomorrow & take stock of the situation.”

Andhra Pradesh Chief Minister N Chandrababu Naidu has written a letter to Modi, appealing to him to declare Cyclone Hudhud a “national calamity”. He has also sought Rs 2,000 crore as ad hoc help from the Centre for rehabilitation and relief.

Naidu had called Modi when the cyclone was battering Andhra’s coastal districts on Sunday afternoon. “It is very severe. All arrangements have been made to take care of rescue and relief operations," he had said to the prime minister over telephone, according to a report in The Times of India. Modi had, then, assured Naidu of all possible assistance in relief and rescue operations.

The severe cyclonic storm, Hudhud, claimed three lives in Andhra Pradesh and affected Visakhapatnam, Srikakulam and Vizianagram and East Godavari districts. It is reported to have battered 320 villages in 44 blocks of these districts. The authorities had evacuated 300,000 people to safer places by Sunday morning. More than 100,000 people are still in relief camps.

Reports are still pouring in from different parts of the region, after which the total damage caused by this storm will be assessed.