Poison on the platter 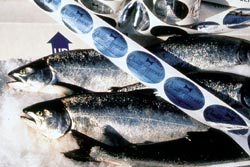 farmed salmon have significantly higher levels of toxic contaminants than salmon from the wild, scientists from the us have found. Levels of polychlorinated biphenyls, dioxins and pesticides are on an average 10 times higher in farmed salmon as compared to their wild counterparts. These chemicals not only threaten the immune and reproductive systems of humans, but also trigger cancerous growth.

Studies conducted in 2002 had also suggested that the farmed varieties might be more contaminated, but they were dismissed by the industry, as they were based on small samples. During the new investigation, environmental experts from the us-based universities of Indiana, Michigan and New York analysed 700 farmed and wild salmon from all over the world. They discovered that the most contaminated salmon were farmed in Scotland and the Faroes.

The scientists assert that as per the risk estimates for cancer proposed by the us Environment Protection Agency, us citizens should not eat more than 55 grammes of the fish every month -- a quarter of a normal portion. They have even calculated that the consumption limit for farmed salmon from Canada is just half a portion a month. The limit for fish from Chile is one portion a month.

Salmon were once a rare and expensive delicacy. But in the past 20 years, farming has boosted their production considerably. People are currently encouraged to eat hundreds of grammes of fish each month because it contains omega-3 fatty acids that reduce the risk of death from heart attacks.

The scientists conclude that farmed salmon pose risks that detract from the beneficial effects. According to them, the fish should be labelled as farmed or wild; this will allow consumers to make an informed choice.