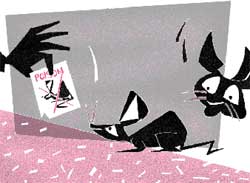 predatory birds and mammals are being poisoned after eating rats which have high levels of pesticides in their bodies. The proportion of barn owls found with anticoagulant rodenticides in their livers increased from 5 per cent in 1983-84 to 36 per cent in 1995-96. This was stated in a study done by Ian Newton and his colleagues at the Institute of Terres-trial Ecology ( ite ) in Monks Wood, Huntingdon, uk.

The figures are based on autopsies conducted on 717 barn owls all over uk. About half of them were killed by cars. The study also found that 9 out of 29 dead polecats collected between 1992 and 1994 contained rat poison. The study says that the true mortality may be higher because when the animals consume the poison they become lethargic, and tend to die in woodlands or other concealed places.

More worrying is the threat to rare birds. Out of 10 fledging Red Kites that left their nests in 1998 in the Midlands, seven died, according to Ian Carter, who leads the Red Kite recovery programme run by uk government conservation agency, English Nature. The autopsy of the only dead bird found showed that it had been poisoned by bromadialone after eating a rodent. Andrian Meyer, a rodent control consultant based in Berkshire, uk, says the problem is enormous and there is no easy way out.

Ken Wildey of the uk agriculture ministry's Central Science Laboratory in York warns that rodenticide-resistant rats and mice are a threat to many species, from domestic dogs and cats to foxes, weasels, stoats and birds of prey. Anticoagulant poisons were first introduced in the 1950s.

These poisons accumulate in a rodent's body until a lethal dose is reached and the animal dies of internal bleeding. But most rats have become resistant to first-generation anticoagulants such as warfarin. Many are also resistant to the second-generation poisons such as difenacoum and bromadialone, which are more toxic. These chemicals also stay in the body longer, making it more likely that the rodents will accumulate enough of these chemicals to poison predators.