Public protests against posco’s steel plant in Jagatsinghpur district of Orissa turned violent on May 15 when police lathi- charged people sitting on dharna and fired rubber bullets at them. Over 100 persons were injured. The protesters had been blocking the road to the South Korean company’s steel plant site since January 26. The police were helping the district administration acquire land for the project.

“We saw policemen torching shops and houses. They used unjustified force to evict posco Pratirodh Sangram Samiti (ppss) members protesting peacefully on Balitutha bridge,” said Satyabati Swain, an activist. Kishore Kandi of Dhinkia village said police has filed false cases against all protesters. He said he did not dare to step out of the village to seek treatment for his back injury caused by a rubber bullet.

Even bystanders were not spared. Alekh Chandra Sahoo, 72, who lives next to the Balitutha bridge said his house was burnt along with rice stocks by the police. Sahoo’s daughter-in-law showed the bruises on her leg caused by police beatings. The police action was the second such incident in the state in a week. On May 12, one person was killed and several injured when police used force to quell protests in Chandia village in Jajpur district where land is being acquired for Tata’s steel plant (see ‘Kalinga Nagar turns into battleground’, www.downtoearth.org.in). 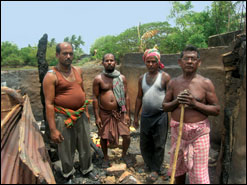 Jagatsinghpur’s superintendent of police, Devdutta Singh defended the police action. “They (the villagers) had drawn a line on the road and barred government and company officials from stepping beyond that point. This cannot be allowed in a democratic set-up,” Singh said. The road leads to Dhinkia, Nuagaon and Gadkujang panchayats where land is being acquired for posco. Singh denied police set houses on fire in Balitutha area. The fire might have been caused by bombs hurled by ppss activists, he said. But Abhay Sahoo, the president of ppss, said, the protest was peaceful and democratic.

Four days after the incident, Orissa Chief Minister Naveen Patnaik met people’s representatives in Jagatsingh-pur. After the meeting, the government proposed posco should exclude 121 ha of privately owned land in Dhinkia from the project. posco officials declined to comment. Sahoo said people want the company to move out of the area lock, stock and barrel.


posco signed the agreement for the 12 million tonne steel project with Orissa government in June 2005. The state identified 1,620 ha for the project, including 1,253 ha forestland. The Union Ministry of Environment and Forests (moef) approved the diversion of forestland for the project last December with a rider—the tribal people and other forest dwellers of the area should give their consent as provided in the Forest Rights Act (fra) of 2006. The state government told the ministry there were no tribals or forest dwellers in the area cultivating the land under acquisition for 75 years who could stake claim under fra. The ppss president said the state was misrepresenting facts as all the families in the area were forest dwellers who have been growing betel vines in the forest for over 90 years. He said more than 500 families in Dhinkia had filed claims under the fra but the government did not accept them. The environment ministry should send a team to the area to ascertain the facts, he said.

Jagatsinghpur collector Narayan Chandra Jena said as far as he knew people in the area had not filed any claim under fra. Steel and mines minister Raghunath Mohanty said he was still hoping for a solution to the deadlock.