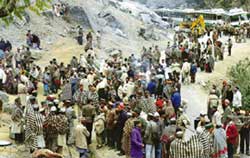 protests against the 1,000-mw Karcham Wangtoo Hydroelectric Project in Kinnaur, Himachal Pradesh, took a violent turn on December 9, 2006, when the police opened fire on protestors trying to break prohibitory orders imposed in the area. The orders had been imposed to prevent the agitating tribals from entering the construction site.

According to Arvind Sharda, the superintendent of police, when the police force tried to stop the people, a few of them started pelting stones, which injured around 25 personnel. The police then resorted to water cannons, teargas and even firing, in which five tribals were injured. One of them sustained a bullet injury on his arm, said Shyam Sunder Negi, president of the Karcham-Wangtoo Sangharsh Samiti, the main group of protestors.

As soon as the news of the firing spread, the situation became worse; agitators even blocked the Hindustan-Tibet road near Wangtoo.Jaypee Karcham Hydro Corporation--earlier forced to stop construction work on the Rs 7,760 crore project coming up on the Sutlej--demanded police protection on the basis of payment, to the tune of Rs 13 lakh per month for two reserve companies to be deployed at the site.

The tribal population in turn had taken refuge with their deities (which are embodied in living persons as per the tradition in Kinnaur and act as moral voices of the society), with the deities telling them to continue protests (see 'Villagers in Himachal block hydel project', Down To Earth , July 15, 2006).

On December 21, the state government ordered an enquiry into the matter and reassured the protesting tribals that all those responsible for the incident will be dealt with.