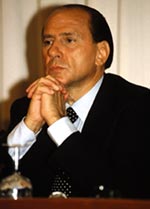 A rift has emerged in the Italian government in connection with the use of genetically modified (GM) crops. Divergent groups in the country--farmers, environmentalists, leftists and even some rightists--oppose GM crops. The general public opinion is also against the introduction of GM seeds. But prime minister Silvio Berlusconi recently blocked a move by his own agriculture minister, Giovanni Alemanno, to impose restrictions on the cultivation of GM crops. Alemanno had taken the step in response to the EU's recent decision to add genetically modified strains to its common seed catalogue, which opened the way for farmers across Europe to plant GM seeds.

While Berlusconi branded Alemanno's step "illiberal", the latter warned that "if it proves impossible to get it [his proposal] through cabinet, we shall have to find other ways". Meanwhile, the country's farmers have said that any delay in formulating the rules for GM seeds might lead to next year's harvest being unintentionally "contaminated". Berlusconi's Forza Italia party supports GM seeds but, as is evident, there are many within the party who don't espouse the view.