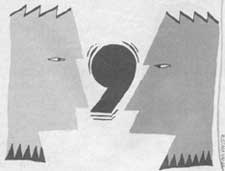 THE SOUTH had a two-point agenda in Rio: funds and technology. It failed to get both. The North continued to insist that technology is a private resource which states cannot give away, whereas the South continued to ask for technology on preferential and concessional terms.

If there was any movement forward, it was in the agreement that the northern governments may purchase private patents and licences at commercial terms and transfer them to the South on concessional terms. The European Community was in favour of this, but Japan and the US opposed it.

Where will the money to purchase this technology come from? Even a G-77 delegate admitted it would probably come from the agreed aid budgets, that is, out of the financial commitments of the donor countries, not in addition to them.

The South wanted to include the concept of "compulsory acquisition" of technology, but industrialised countries made it clear that companies would transfer technology only in extreme circumstances. The compromise text includes safeguards like measures to prevent the abuse of intellectual property to ensure that compulsory licensing is as restricted and regulated as possible.

The final text endorses the idea that developing countries should have access to environmentally-sound technologies on concessional and preferential terms, but with due regard to the intellectual property rights of northern industries.

The second issue, concerning the terms on which the transfer of environmentally-sound technology would take place, got embroiled in the politics of a punctuation mark. Developing countries wanted the terms to be concessional and preferential, that is, removed from normal commercial dealings.

The third issue was the North's desire to protect intellectual property rights. It repeatedly attempted to describe the entire negotiation as an agreement on technology cooperation. But as one Indian negotiator put it, "If we can only buy technology on commercial terms, then why are we wasting our time here?"

The agreement reached in Rio upholds the sanctity of privately-held knowledge and technology -- an objective which ironically both southern and northern governments when talking about the traditional knowledge of the poor in the biodiversity convention.