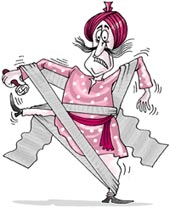 as haryana gears up for panchayat elections during January-February 2005, its model panchayat, Kausli in Rewari district, doesn't seem too enthusiastic. Kalpana Kumari Yadav, a resident, says with a touch of indignation: "I voted in the 14th Lok Sabha elections but my name is missing from the new electoral list for panchayat elections." Admits Ashok Kumar Arya, member of Kausli panchayat, "Names of over 20 per cent eligible voters are missing from rolls."

Neighbouring panchayats have similar grievances, putting a question mark on the practice of preparing separate electoral rolls for panchayat elections and for Lok Sabha and legislative assembly elections. Jitender Kumar, Sarpanch of Jhal panchayat in the same district asks, "Why can't a single electoral roll be prepared for all the three elections? It will be easy to update."

Most state election commissions (secs) would agree with Kumar. Five states go for panchayat elections over the next three months, and another 15 by the end of next year. Two major concerns are: the issue of separate electoral rolls, and political interference that hinders the work of secs (see box: Advocating change).

secs are constitutionally required to prepare a separate roll for panchayat elections. At times, sec rolls are different from those prepared by the Election Commission of India (eci). This system not only duplicates work, but also causes confusion. In Rajasthan, inconsistencies in rolls for panchayat elections have invited 12 stay orders from the high court. "It is a wastage of manpower and resources to make separate rolls. Suitable changes should be made in the constitution," says Rajesh Tandon of Participatory Research in Asia, a non-governmental organisation in Delhi.
The demand for uniform electoral rolls is gaining momentum. Over the past year and a half, state election commissioners have met thrice to press for it. At the National Consultation on Elections to Local Governments held in Delhi on October 13 and chaired by panchayati raj affairs minister Mani Shanker Aiyar, 14 secs asked for amending the People's Representative Act to facilitate this. secs suggest making panchayat the unit for registering voters instead of the legislative assembly constituency, as is done now. In a resolution adopted at the October meeting, secs cited the process of verification of voters' lists at the gram sabha as an added advantage of preparing electoral roll at the panchayat level.

Back in Kausli's neighbourhood, confusion reigns. In Sadatnagar panchayat, father Nihar Singh and son Rajinder Singh will vote in different wards though they stay in the same house. This is due to the new delimitation and reorganisation of constituencies. "Ward boundaries have been changed and at least one ward has been added to each village. Voters are unaware of the ward they belong to. It smells of political interests," says Vikas Yadav of Sahsavas panchayat. Unlike at the national level where a delimitation commission decides on constituencies and reservation, state governments have executive power to do so for panchayat elections any time before the polls.

As a result, boundaries of constituencies are often changed. Absence of adequate data for identifying sc/st/obc populations is used to delay delimitation, and thereby, the panchayat elections. In Jharkhand, panchayat elections haven't been held since1978, because of delimitation and reservation problems. Says Chandan Dutt, an expert on local governance based in Ranchi, " Panchayat elections are hostage to political whims now."

In January 2006, eci would extensively review electoral rolls. This is the time secs are targeting to incorporate changes in the panchayat elections system, including a uniform electoral roll.