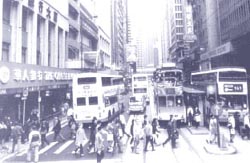 the Hong Kong government has unveiled a comprehensive blueprint to combat the city's deteriorating environment. Topping the clean-up campaign are efforts to improve the quality of air, which has deteriorated sharply during the past couple of years.

Diesel-powered vehicles, such as taxis and mini-buses, are the prime targets of the government. Hong Kong's 4,300 mini-buses and about 17,800 taxis run on diesel and are more polluting than the 200-odd taxis that run on liquefied petroleum gas. Figures show that 30 per cent of vehicles in Hong Kong run on diesel engines, compared with 19 per cent in Japan, 17 per cent in Singapore and 10 per cent in the uk . Tung Chee Hwa, Hong Kong's chief executive, has said the government will be spending about us $6.4 billion over the next 10 years to tackle air and water pollution, waste-reduction and cross-border pollution.

The Conservancy Association, a non-governmental environmental group, believes that at least 2,000 premature deaths annually could be attributed to air pollution. Government studies estimate that the overall cost of air-pollution-related illnesses in Hong Kong is around us $835.2 million. In August, the air pollution index in Singapore soared to 159, a level considered to be dangerous. When the index goes even above 100, people with heart or breathing problems are advised to stay indoors and keep away from heavy traffic.

The situation has become so alarming that 21 chambers of commerce have come together to form the Hong Kong Business Coalition on Environment -- a significant development given the fact that the business community is not exactly known to be keen on environmental reforms.

People in Hong Kong are frequently seen hurrying about in the heavily-polluted areas with their hands over their noses as passing vehicles emit noxious smoke. Clear skies are very rare. On many days, only the hazy outlines of buildings are visible across the Victoria Harbour. Some reports suggest that expatriates, particularly those with young children, are leaving or shunning a posting to the city because of the deteriorating environment.