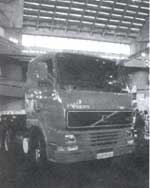 ONE truck pollutes as much as 50 cars today, but all this is soon going to become history. Diesel engine manufacturers have agreed to pay US $83 million in fines and spend $1 billion to clean up the environment to avoid a US federal lawsuit over alleged cheating on engine performance tests.

More than a million trucks used a special software in the computer-controlled fuel systems of diesel trucks which suppressed pollution at low engine speeds. This enabled them to bypass a test, but allowed them to enrich the fuel mix and belch fumes at high speeds to improve fuel economy and reduce engine stress.

This is the most expensive air pollution deal ever. It will hasten the implementation of tough new pollution controls for the world's largest manufacturers of trucks and buses, while substantially improving air quality for millions of US citizens, say environmentalists.

The settlement reminds one of the fines imposed in the 1989 Exxon Valdez oil spill, which resulted in $125 million in fines and setting up of a fund worth $900 million to clean up the environment.

"The diesel engine industry has illegally poured millions of tonnes of pollutants into the air," said attorney-general Janet Reno, who announced the settlement jointly with Carol Browner, who heads the US Environmental Protection Agency (EPA).

Government lawyers, while speaking to The New York Times, accused the manufacturers of using computerised devices that enabled engines to bypass emissions tests. The EPA alleged that these vehicles spewed an additional 1.3 million tonnes of smog causing oxides of nitrogen into the air last year alone. That is equivalent to the pollution produced by 65 million passenger cars, or about six per cent of nitrogen oxides emitted by factories, vehicles and power plants combined.

"Todaay, we're sending a very clean message: if you illegally pollute, you will have to pay," Browner said. "We set air quality standards to ensure that the air people breathe is clean and healthy. No person or company has the right to violate these standards."

The truck manufacturers include Mack Trucks Inc, Cummins Engine Company and Caterpillar Inc. They, however, maintain they did not break any laws but they have agreed to pay the fines. These companies have also agreed to spend $110 million to finance anti-pollution projects around the US. The payments should help improve urban air quality by financing new buses and trucks that run on electricity or compressed natural gas. But most of the cost for the industry comes from new requirements to build cleaner new engines. The settlement stopped short of ordering the recalling of all engines, but it forces manufacturers to upgrade older diesel engines the next time they are brought in for scheduled maintenance. In addition, the companies have agreed to a series of new emission standards. The costs of rebuilding engines and revamping factories alone was projected at $850 million. Overall, emissions from diesel engines are expected to drop by a third over the next five years, regulators said. The seven manufacturers represent about 95 per cent of the diesel market. They include Detroit Diesel Corp, Renault SA and Volvo Truck Corp.

The settlement came after months of difficult negotiations. Industry officials said that penalties and performance deadlines would cause considerable hardship. "It hurts. It basically wipes out our earnings for the third quarter," said John Fanner, vice-president and general counsel for Detroit Diesel, to The New York Times. The companies were faced with a choice either to accept the settlement or face the prospect of years of litigation. The Chicago-based Engine Manufacturers Association saw a positive side to the deal. "This is a good thing for us because it requires US to move up our research and develop better products," said spokesman Charlie Souhrada.

Environmentalists and public health workers were generally happy with the settlement, although some were disappointed and felt that officials had been soft on the truck manufacturers and had not ordered a recall of all the rigged engines.

"No industry deal will be good enough unless it accounts for and eliminates every pound of illegal toxic pollution from the nation's trucks," said Richard Kassel, a senior attorney for the Natural Resources Defence Council. "That's going to be the acid test," he added.