Extensive domestic use of coal in China has led to an increase in the incidence of respiratory illnesses, which are now among the leading causes of death in the country 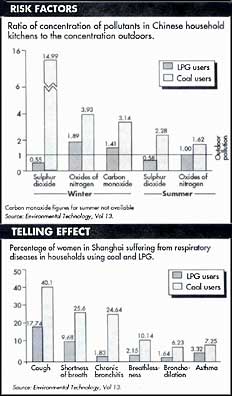 DESPITE China's much-vaunted economic development, more than half its population still depends on highly polluting fuels to meet domestic needs and several studies show that chronic respiratory diseases are on the increase because of exposure to the smoke from these fuels.

In fact, chronic respiratory diseases are among the leading causes of death in China and mortality from such diseases ranks third in all causes of deaths, even in a modern city like Shanghai. Use of coal and briquettes is widespread in cities, while about 80 per cent of the rural population -- about 660 million people -- depend on wood and the dung of cattle and sheep for cooking and heating.

Studies indicate this has led to significant increases in the incidence of lung cancer, birth defects, fluorosis, lowered immunity and respiratory diseases and symptoms, data shows (Environmental Technology, Vol 13). Liquefied petroleum gas (LPG) is available only in the cities, though its use is increasing. In the capital, Beijing, as many as 70 per cent of the families use LPG, but only about half of Shanghai's population has access to LPG. The rest are dependent on coal and briquettes, whose burning produces such pollutants as suspended particulates, sulphur dioxide, oxides of nitrogen and carbon monoxide. These emissions have been found to be far higher than emissions by gas stoves. Studies show that in coal-burning households, pollutant levels indoors are often higher than those outdoors (See table). In Shanghai, which had an estimated million coal stoves in 1984, sulphur dioxide emissions amounted to 8,000 tonnes, one-tenth of the city's total sulphur dioxide emissions.

Cow- and sheep-dung are commonly used in areas deficient in coal. Though data on pollutants emitted by burning dung is scanty, it suggests carbon dioxide, carbon monoxide and suspended particles, especially particulates that can be inhaled, are emitted in greater amounts than coal.

Biogas is gaining popularity in parts of southern China and though reports on indoor pollution from biogas are preliminary, some studies in China indicate sulphur dioxide emissions are only 2 per cent of emissions from bituminous coal and other pollutants were also significantly less. Health effects A Shanghai study comparing the symptoms and prevalence of respiratory diseases in women using different fuels for domestic cooking found coal-originating indoor air pollution was responsible for chronic bronchitis and emphysema -- a lung disease causing breathlessness -- and, to a large extent, for respiratory symptoms such as cough and shortness of breath (see table). Another study, conducted in Nantong in Jiangsu province, concluded the incidence of pneumonia among one- and two-year-olds was significantly higher among those burning coal in their homes and led to higher birth defect rates, compared with families using LPG.

A lung cancer study in Shenyang city showed the risk was 50-70 per cent higher among those using coal, while an epidemiological survey of lung cancer prevalence in Guangzhou showed coal combustion, especially exposure to the pollutants while cooking, to be an important contributory factor for the disease among women.

Data gathered in Xuan Wei county of Yunnan province in south-western China showed lung cancer prevalence stems most from domestic use of coal than from any other risk factor, including smoking. But a combination of smoking -- predominantly among Chinese males -- and burning coal for cooking was found in one study to enhance the effect of each on lung cancer among both men and women.

During winter in the colder northern Chinese cities, high coal consumption and resulting indoor air pollution contribute significantly to lung cancer and its prevalence is higher than in other warmer Chinese cities.

Scientists have identified high fluoride content in Chinese coal as the leading cause of fluorosis. In the suburbs of Xiangtan in Hunan province, dental fluorosis was found to be prevalent in 35.2 per cent of the population, but in a neighbouring area where people used firewood, only 4.9 per cent of the populace was affected. The fluoride concentration in drinking water in this area was less than 1 mg per litre, compared with the fluoride concentration in coal, which is 190-327 mg per kg.