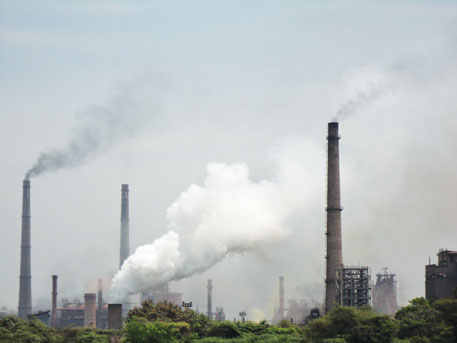 CONCENTRATION of ground-level ozone continues to rise across the globe despite international regulations to control the gas. It is released in the air mainly due to burning of fossil fuels in vehicles and industries. High concentration of the pollutant has long been associated with several health issues like respiratory problems and inflammation. It has now been found that exposure to high ozone levels may also increase appendicitis risk.

A study published in the August issue of Environmental Health Perspectives reveals that continued exposure to high ground-level ozone concentrations can lead to perforated appendicitis, a condition in which the appendix bursts due to inflammation. The organ is a vestigial part of human intestine, located near the junction of the small and the large intestines.

The study corroborates earlier findings by Canadian researchers in 2009. While the previous study was based on ozone levels in a single-city, the current study has identified over 35,000 appendicitis patients admitted in hospitals across 12 Canadian cities between 2004 and 2008.

For the study, the researchers calculated patients’ ozone exposure on a mean hourly basis using daily ozone monitoring data collected over more than 80 per cent of the study days. Factors like daily mean temperature and relative humidity were also taken into account. They found that with every 16 part per billion increase in ozone levels for seven consecutive days, the risk of a burst appendix rose by 22 per cent. It was found that elevated ozone levels increased the risk of developing perforated appendicitis but not of non-perforated condition.

“The biological mechanism in humans remains a mystery,” says lead author, Gilaad Kaplan who is an associate professor of gastroenterology at the University of Calgary in Alberta, Canada. He says ingestion of pollutant particles has been found to alter gut microbes and induce inflammation in mice. A similar mechanism might be behind the recent find, says Kaplan.

Sandeep M S, a medical gastroenterologist at Mazumdar Shaw Medical Centre at Narayana Health City in Bengaluru says other environmental factors might be at play and it is difficult to pinpoint that ozone exposure causes inflammation of the appendix. He, however, says it would be interesting to see whether such epidemiological data can be correlated with other communicable and non-communicable diseases.

Kaplan says the study is important as it presses upon the need to improve air quality and reduce pollutant exposure in cities. He says further studies are required to explore the interaction of multiple risk factors behind appendicitis, like pollution and diet.

Ambient ozone concentrations and the risk of perforated and nonperforated appendicitis: A multicity case-crossover study