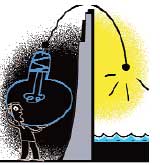 Poor monsoon last year has affected power generation in Odisha. With water levels falling in the reservoirs of hydro-power projects, electricity generation has dipped. People staying at home have to bear power cuts for an hour every day.

Factories are facing three hours of power outages. Industries have been warned they may have to go on forced holiday once a week very soon.

“Load-shedding has become imperative and the factors are beyond our control,” said energy minister Atanu Savyasachi Nayak. He said there is a shortfall of about 500 MW each day; the daily average peak demand for electricity is 3,300 MW.

Most of the shortage is attributed to decrease in power generation by hydropower units. The seven hydel plants in the state are generating only 837 MW electricity against a total installed capacity of 2,085 MW.

Power demand in Odisha has risen by 1,320 MW in the last four to five years due to industrial growth and the rural electrification drive. The demand is set to rise further as 50 new industrial units, including 34 steel plants, are proposed. Nayak said the situation would improve in the next two years when five out of the 21 proposed coal-fired power plants get ready. “Besides, the government has formed the Orissa Thermal Corporation Limited for setting up a 2,000 MW thermal power plant at Rengali in Angul district. The third and fourth units of Ib Valley thermal project in Jharsuguda district are likely to be completed soon,” said Nayak.

Trade union leader Ramesh Satpathy of oseb (Orissa State Electricity Board) Shramik Mahasangh said the government is making no effort to reduce transmission and electricity losses which is a high 50 per cent. If the government had worked with a vision, there would have been no power cuts this year, he said.