Are GM trees ready to turn the paper and pulp industry green? 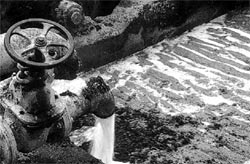 has the time come for paper and pulp industry to go green? If one is to go by the latest research on genetically modified trees, perhaps yes. Scientists have tested genetically modified (gm) poplar trees and given them thumbs up for their regular use. Using gm poplar trees, they claim, will allow lesser use of polluting chemicals used to treat the pulp before paper is made.

The poplar tree is a species used to produce paper pulp. Paper manufacturing consists mainly of eliminating the lignin, which is a substance present in wood and that turns paper yellow. The chemical and heat treatments generate pollution and can be costly. Surveys conducted by the Delhi-based non-governmental organisation, Centre for Science and environment, had shown in 1999 that even the best of the industries in the business were using as much as 138 tonnes of water and 0.25 tonnes of chemicals to treat just one tonne of paper and generating 139.2 tonnes of wastewater and chemicals in the dirty process.
Now researchers at Institut National de la Recherche Agronomique (inra), France, in co-operation with researchers from other laboratories working on European projects, have obtained genetically-modified poplar trees that produce less lignin. This result is the fruit of many years of basic research on the mechanisms behind wood formation in plants. During this period, the methods used in biology have undergone drastic changes, from the original conventional biochemical approaches to the most modern methods used in genomics.

Using genetic engineering techniques, the researchers have inactivated the genes involved in lignin synthesis in the poplar tree. These genes controlled the synthesis of enzyme cad (cinnamyl alcohol dehydrogenase), which is involved in the production of the elementary components of lignin. Inactivating the gene of the cad enzyme causes the lignin content in the wood to decrease but also, and more surprisingly, the structure of the lignin to change. The lignin produced consist of shorter chains and are eliminated more easily in the paper production process. One can therefore see how poplar trees under-expressing cad can be of benefit in paper production.
But there still needed to be a guarantee that these results, obtained from six month-old poplar trees cultivated in green houses, can also apply to trees grown under usual forest plantation conditions. Transgenic poplar trees under-expressing several enzymes, including cad, were cultivated in an experimental field (with the prior permission of the French Biomolecular Engineering Commission). After four years of cultivation, the researchers have been able to observe that, at least in the case of one transformed line of trees, growth was normal, the over-expression of the enzymes was lasting, and that the poplar trees under-expressing the cad enzyme produced a paper pulp that was easier to treat than that produced by the non-transformed poplar trees. The pulp was made entirely from gm poplars that produced more material and needed fewer chemical treatments. Tests showed that the gm pulp needed six per cent less alkali treatment to break down the lignin. It also produced three per cent more paper. The research, published in the journal Nature Biotechnology , also found the trees didn't damage their ecosystem.

The transgenic trees were grown for four years at two sites, in France and England. The trees remained healthy throughout the trial. Growth indicators and interactions with insects were normal. No changes in soil microbial communities were detected beneath the transgenic trees. The expected modifications to lignin were maintained in the transgenic trees over four years, at both sites. Pulping of tree trunks showed that the reduced-cad lines had improved characteristics, allowing easier delignification, using smaller amounts of chemicals, while yielding more high-quality pulp.