The vaquita porpoise is fast heading towards extinction, warns a new study 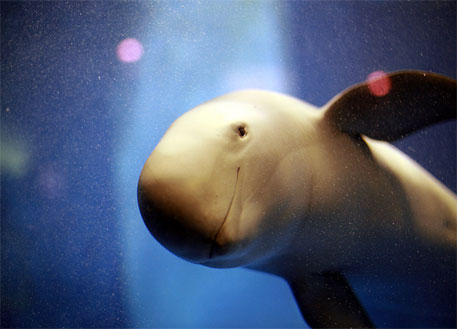 A study released recently warns that the population of the world’s smallest and most critically endangered porpoise has fallen to just 97, and unless drastic action is taken, it will become extinct.

The smallest porpoise, the vaquita, is found only in the northern Gulf of California in Mexico.

The study says that fishing gear is the biggest threat to the existence of the vaquitas. The cetaceans (aquatic carnivorous mammals) often drown after becoming entangled in shrimp nets or illegal gill-nets set for the totoaba, an endangered fish that is also found only in the Gulf of California.

The totoaba’s swim bladder is illegally exported to Asia to make soup and for unproven treatments in traditional medicines. Demand for totoaba bladders has spiked recently, and a single totoaba bladder can sell for as much as $14,000.

More illegal fishing is occurring in the marine reserve set aside for the vaquita.

“I was out there about a month ago and saw blatant gill-net setting within the vaquita refuge,” Barbara Taylor, a member of the International Committee for the Recovery of the Vaquita and conservation biologist with the National Oceanic and Atmospheric Administration was quoted by the New York Times as saying.

In the light of the report, the committee has urged the Mexican government to increase patrols, including night-time surveillance, to ensure that gill-net fishing ceases.

“Unless there is nearly perfect enforcement, it is game over for vaquita,” warned Taylor.