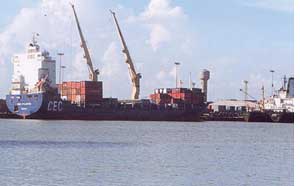 Silt deposits at the mouth of the Hooghly river have rendered Haldia port nearly unnavigable, raising fears that India's second largest container port might soon be shut down. The formation of sandbars, largely due to inadequate dredging, has raised the riverbed, making the shipping channel shallow. At two locations in the channel the depth is less than the minimum required for loaded cargo ships to navigate their way to the port in West Bengal from the Bay of Bengal.

The ideal navigable depths at these two locations, named after sandbars Jellingham and Auckland, are 6.1 metres and 6.3 m respectively at zero tide, the average low-tide height there. In October, a Kolkata Port Trust survey found that the depths at the two locations had decreased to 3.9 m and 4.3 m respectively. With this the approach to the port from the south is in danger of getting blocked.The approach from the north was blocked in 1986 due to the formation of sandbars or shoaling.

"To tell the truth, the port is as good as closed. It's functioning somehow on the skills of river pilots who know the sand bar formations and navigate ships through the channels. A disaster is waiting to happen," said Ramakant Burman, the secretary of the Haldia Dock Officers' Forum. Burman blew the whistle on the crisis after he came across a letter, dated July 23, from the director of the port's marine department to the chairman of the Dredging Corporation of India (dci). The letter said the dock faced "total closure" unless more dredgers were sent immediately.

Power companies, steel and chemical plants and refineries are spending about Rs 1,050 crore annually to divert their cargo via Paradip and Visakhapatnam ports. Companies whose trade is affected are Haldia Petrochemicals, Indian Oil Corporation, Mitsubishi pta, Tata Steel and sail. Diverting cargo is costing Haldia Petrochemicals alone Rs 80 crore a year. If the port shuts down, these industries will be at risk. It will affect trade and commerce in the region, including the Northeast, Nepal and Bhutan (see Counting losses).

The crisis has been building up over several years because of dci's failure to deploy enough dredgers and the Union government's delay in clearing the River Regulatory Scheme meant to improve the navigability of the river.


The Haldia Dock Complex and the Kol- kata Dock System further upstream are managed by the Kolkata Port Trust that comes under the Union shipping ministry. Haldia dock, also called Haldia po- rt, handles 80 per cent of the cargo managed by the port trust. Both docks need regular dredging to maintain navigable depth since huge volumes of silt from upstream get deposited at the mouth of the river (see Hooghly's challenge).

dci, a public-sector unit based in Visakhapatnam that also reports to the shipping ministry, carries out almost all the dredging in Indian ports. In April 2002, the Haldia Dock Complex entered into a contract with dci to maintain minimum depths of 5 m and 5.5 m at Jellingham and Auckland at an annual cost of Rs 300 crore. As part of the contract, dci was to provide five dredgers. In case the five were not able to do the job, an additional dredger was to be provided for 120 days in a year, subject to availability.

Since April 2008, two of the five dredgers meant for Haldia had been sitting at the Visakhapatnam shipyard for repairs. Another was being fixed at the port itself. Of the remaining two dredgers, one had only one of its two suction tubes working. dci has a fleet of 12 dredgers, several of which are over 30 years old and which, shipping ministry officials admit, need constant repair. 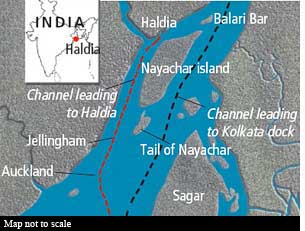 Burman alleged that despite repeated reminders dci could not send additional dredgers because seven of its best dredgers have been deployed at the controversial Sethusamudram project site in Tamil Nadu, home state of shipping minister T R Baalu. dci leases dredgers when required. But Union shipping secretary A P V N Sharma said it was difficult to find good dredgers to lease because most of them were in Dubai, working on the Palm Islands, the largest artificial islands.

After Burman broke the news to the media and sent letters to the prime minister and state leaders, the shipping ministry in early November moved several dredgers to Haldia from Paradip and Visakhapatnam, and one from the Sethusamudram site. "Six dredgers are already at the port, of which five are working. Another is expected to reach soon," said B K Sahu, chief public relations officer of the Kolkata Port Trust. Two more chartered dredgers are on their way to the port. Haldia would maintain a depth of 4 m till December using additional dredgers, he said. Port technical officials, however, said that given the silt buildup, at least 10 dredgers should be put to work immediately at the Auckland and Jellingham bars, just to keep the port alive.

In August, the port trust reduced the width of the five-track shipping channel by dropping the silted track, or navigational lane, nearest Haldia. It also reduced the under keel clearance requirement (the gap between the bottom of the ship and the riverbed/ seabed) for Haldia-bound vessels to 1.1 m from 1.25 m. Port insiders said these face-saving measures only gave an appearance of the depth having increased. In reality, they increased the risk of vessels running aground.

Several measures were planned to open up the Balari channel but were left half-done. This has largely contributed to the situation today. Measures included a guide wall at the northern tip of Nayachar and a deflecting spur a little upstream on the channel. Deflecting spurs are constructed transverse to the river flow and projected from the bank into the river to deflect the current towards the opposite bank. The idea was that water would hit the spur and move through the northern guide wall into the Balari channel, thereby building enough momentum to wash away the silt towards the sea, aided by dredging.

The guide wall was built in 1986 but the spur is yet to come up. Consequently, there has been heavy shoaling at the guide wall and the northern tip of Nayachar has nearly merged with the southern tip of Balari bar.

Another guide wall was to come up at the southern tip of Nayachar to prevent it from extending further into the channel. That did not materialize. Now Nayachar's southern tip is growing towards a smaller land bar called Mizzen Sands, nearly blocking the channel between the two land bars through which ships make their way to Haldia.

In a meeting of the port's technical advisory committee in April this year, the Kolkata Port Trust's chief hydraulic engineer said the Haldia-Balari region was "heading towards an irreversible morphological change". Yet no action was taken until Burman blew the whistle on it. Kolkata Port Trust Chairman A K Chanda refused to comment.


The authorities are well aware that dredging just to keep a channel open at its present depth is not the answer to the Hooghly's navigability problems. More so since the dredgers dump the silt a mere 5 km from the dredging site and incoming tides push about 20 per cent of the material back in.

Every year, the port dredges 22 million square metre of silt. For dumping it ashore, at least 440 hectares are required, geologists said. The port trust was looking for land around Nandigram but since acquiring land is difficult, shore dumping seems a remote possibility.

In 2003-04, the port trust revived its river regulatory scheme to reopen the Balari channel by cutting through the riverbed. In March this year, the Planning Commission cleared the scheme. The cost has increased from less than Rs 100 crore in 1986 to between Rs 900 crore and Rs 1,000 crore today. But there's more red tape involved. The scheme now requires a revalidation study by the National Institute of Ocean Technology in Chennai, and a clearance by the public investment board. "It could take two more years by which time yet another study will be required because the shoaling would have increased," said Burman. "In the end, I think, the Haldia channel will become a prize tourist spot, nice for boating."