How environment-friendly is biodegradable plastic? The debate rages 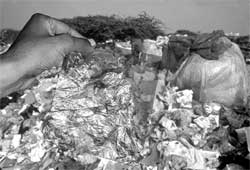 plastic appears to have a tensile tendency to stay in the news. From being feted as a path-breaking invention to being dumped by developed nations as a major pollutant, it has consistently hit the headlines. And now, a row has erupted over the efficacy of plastic in its biodegradable avatar. While the industry swears by it, experts are skeptical.

A biodegradable substance, by definition, breaks down naturally and can be disposed of without causing pollution. Contrary to manufacturers' claims, the general opinion is that most types of biodegradable plastic merely disintegrate and do not decompose.

"Biodegradable plastics are a binding of polymer compounds with starch. When starch -- a natural substance -- degrades, the polymer chain disintegrates. But positive developments, if any, have been restricted to laboratories with no discernible environmental benefit as yet," says Bharati Chaturvedi of environmental research and action group Chintan in New Delhi.

S N Maiti, head of the department, Centre for Polymer Science, Indian Institute of Technology, Delhi, is more categorical. "In the case of plastic polymers, starch -- which comprises only a part of biodegradable plastic -- is destroyed by the inbuilt mechanism. The resultant collapse of the plastic film gives an impression that there is no residual pollutant. In fact, plastic elements can continue to gnaw at the soil for more that 500 years. Worse, the presence of chemical compounds such as dyes and coloured pigments can inflict greater damage," he says.

Industry, however, has a diametrically opposite view. With the annual consumption of plastic in India expected to hover around 3 million tonnes to 5 million tonnes, its biodegradable version is cited by manufacturers as the perfect solution to curb pollution.

"The product has tremendous commercial potential, especially in India as the country suffers from uncontrolled garbage growth," says Ashish Paul, chief executive officer of Bio-D Plastics, a Gurgaon (Haryana)-based firm. The company is set to launch an entire range of biodegradable plastics. The Bio-D system, developed by the firm, completely decomposes the plastic in three months, claims Paul.

"Our product consists of polythene granules and carbohydrate-based polythene which burn like paper without emitting toxic gases like dioxin. It takes less than two months for our plastic to get decomposed in a landfill site," says S S Nevgi, managing director of Om Bioplast Pvt Ltd in Pune, Maharashtra.

But are these merely tall claims?

"Companies with a commercial interest in biodegradable plastics are hard-selling the product as an environment-friendly one. But, till now, very little has actually been proved in this regard," points out Ravi Agarwal, chief coordinator of Delhi-based non-governmental organisation Srishti.

Anjum Vijay, the owner of a plastic recycling unit in Delhi, is also not optimistic. "Currently, the prohibitive price of biodegradable plastic may go against its success," he contends.

A point to ponder is that despite being around for two decades in the West, biodegradable plastic is still not too popular there. In India, the concept is in a nascent stage.

Another issue that needs to be addressed is its use in packaging food products. Even if a breakthrough is made and biodegradable plastic actually hits the market, there will be no takers for the product in the food packaging industry, feels Maiti.

Clearly, the product has triggered a face-off between its manufacturers and environmentalists. And with the government and non-green plastic lobby expected to throw their hats in the ring, biodegradable plastic will need to muster all its malleability to survive.