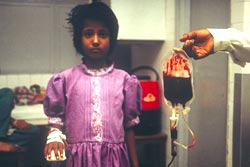 The Union ministry of health and family welfare recently announced that blood donors found hiv positive would be informed of their infection and asked to seek confirmatory tests. This is in contrast to the existing policy, where blood tested hiv positive is discarded without the donor being told about it. Doctors, however, feel that the order would be difficult to implement due to the decentralised nature of blood banking services in India.

According to National aids Control Organisation estimates, India has nearly four million hiv-infected people. Out of these, sexual transmissions account for 80 per cent of the infections. "Informing hiv positive blood donors is an important component of epidemic control and it should have been done long ago," avers Subhash Hira, director of the Maharashtra government's aids Control and Research Centre in Mumbai.

Although the screening of blood for hiv started in India in the early 1990s, health officials say infected donors could not be informed due to a lack of infrastructure for counselling.