The parasite that affects it, controls its own evolution 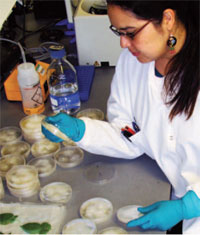 THE Great Irish famine in the mid- 19th century took its toll on more than 700,000 people. The cause was a potato disease called the late blight. More than a third of the country’s people were dependent on potato for food. The famine is now a thing of the past, the blight is not. The potato plant is still at risk. Every year the disease results in losses worth US$ 6.7 billion the world over. A genetic analysis of the diseasecausing mold Phytophthora infestans explains the strategy it used to reshape Ireland’s history, single-handedly. A team led by the Broad Institute Genome Sequencing and Analysis, Cambridge, USA, examined the genome of this mold and compared it with that of relatives infesting soybean and trees like oak. The team found the late blight’s genome to be unusually large— almost two to four times the size of other related pests. The genome’s structure was such that it allowed the pathogen to evolve at two different speeds. The genes that allow the parasite to adapt to more plants, thus increasing the variety for it, evolve rapidly. The genes that keep the basic biology of the organism stable, are slower. The result is a mold that has not mutated into a different species and yet it cannot be countered because it can show up in unexpected host plants. The tomato plant is another such victim. “This pathogen has an exquisite ability to adapt and change and that is what makes it so dangerous,” said Chad Nusbaum, lead author of the paper published online in Nature on September 9. “We now have a comprehensive view of its genome, revealing the unusual properties that are behind its remarkable adaptability. This knowledge can foster novel approaches to respond to outbreaks,” he added.