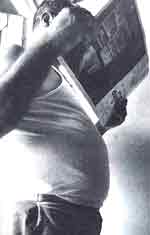 A PROSPEROUS belly often signals an impoverished heart. Nowhere is this connection more pronounced than in the characteristic potbellies of Indians, which make them more vulnerable to coronary artery disease (CAD) than any other ethnic group in the world, say researchers.

Warns cardiologist K Srinath Reddy of the All India Institute of Medical Sciences, "The number of Indians dying of CAD will double in the next two decades and by 2015, cardiovascular disease will be the leading cause of death in India by 2015." A study shows that while CAD incidence has been declining since the 1960s in nations such as the US, there are no reports of a similar decline in India. And, almost all the surveys conducted in the last 30 years on Indian immigrants in the US, UK, Trinidad, Mauritius, Singapore, South Africa and Fiji have found them prone to CAD as well.

More importantly, the surveys found that the risk from the three major traditional risk factors -- high cholesterol levels, high blood pressure and smoking -- was much lower in Indians than in whites.

Scientists have coined a term -- Syndrome X -- to explain why Indians are more susceptible to CAD. Besides the pot bellies, the syndrome also takes into account low levels of high-density lipoproteins, which protect against CAD; glucose intolerance, which leads to high levels of insulin in the blood, and high levels of triglycerides (fats and oils) in the blood, which cause atherosclerosis or hardening of the arteries.

Judging from the data gathered so far, Reddy says, Syndrome X seems to be caused by lack of regular exercise and too much refined sugar.
Despite Syndrome X, however, the role of genes cannot be ruled out. "It's possible that the propensity of Indians to get heart disease is dictated by genetic factors, which are probably triggered because of changes in lifestyles," explains Reddy.

He bases his theory on a mid-1980s survey of CAD prevalence in three socioeconomically different regions -- rural Haryana, urban Haryana and Delhi. The number of heart patients in urban Haryana were less than those in Delhi, but more than in Haryana. Reddy says studies have been initiated to find out if the survey results are related to different diet patterns.