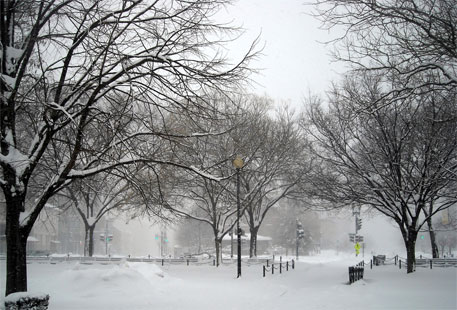 A snow blizzard that hit the northeastern United States on Monday has affected millions in the country. The storm that could dump up to 90 cm of snow has been termed “historic” by the National Weather Service.

Winter storm Juno is expected to dump up to around a metre of snow in parts of the northeast, with the worst affected areas likely to be New England, particularly Connecticut and Massachusetts, says AFP.

Media reports have also suggested that nearly 6,500 flights have been cancelled. Life has come to a standstill as road travel has been prohibited in some areas of New York and residents in various other regions are rushing to stockpile packaged food and other utilities.

States of emergency were declared in New York and New Jersey and a travel ban imposed in Connecticut.

Weeks before this, a few experts had warned that polar vortex which is a large pocket of very cold air, typically the coldest air in the Northern Hemisphere, will soon lead to cold outbreaks in the US and Canada. Earlier in January 2014, millions were affected by the Arctic chill that brought the coldest temperatures in two decades to the centre of the country.

Since then, experts have been debating if climate change is one of the triggers behind the increasing snow storms in the region.

Climate change impacts on extreme events in the United States: an uncertainty analysis

California getting wetter to the north, drier to the south: Natural variability or climate change?