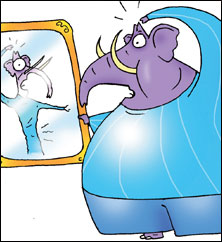 India is poorer than previously estimated. A revised estimation of poverty for 2004-05 using new methodology showed the number of people below the poverty line was 37.2 per cent and not 28.3 per cent, as estimated earlier. The new estimate took into account expenditure on food, basic health and education, unlike the earlier estimation based on per capita calorie consumption.

The inclusions are recommended by a committee headed by economist Suresh Tendulkar, former chairperson of the Economic Advisory Council.

“Growth brought down poverty between 1994 and 2005,” said N R Bhanumurthy, professor at the National Institute of Public Finance and Policy in Delhi. “Non-farm activities have gone up, which led to growth. However, there are criticisms that growth did not bring down poverty as much as it was anticipated,” he added. The recommendation if adopted will have financial implications on the proposed national food security act. Poverty figures using the new method would be used to determine food subsidies placing a larger burden on the government.

“Though there was a decline in poverty between 1994 and 2005, the 2010 estimate will throw up a larger figure,” said Biraj Patnaik, principal adviser to commissioners on the right to food case. Food prices have increased since 2004-05, he added. The 61st round of the National Sample Survey (nss) was used for the 2004-05 poverty estimate.

Until now, minimum expenditure was calculated from expenses on food to consume at least 2,400 calories per person per day for rural poor and 2,100 calories for urban poor. The new method factors the total expenses on food, basic education and health; expenditure on education is derived by adding the average cost of sending 5 to 15-year-olds to school and health expenses from average treatment cost or hospitalization.

The Planning Commission constituted the Tendulkar Committee since questions were raised about poverty estimates based on calorie consumption patterns of 1973-1974. The UN Food and Agricultural Organisation revised the minimum requirement to 1800 calories per person per day. Now the Indian Council for Medical Research has set in motion a process to revise calorie norms for India.

Then there was the presumption that the state pays for education and health. “But the state hasn’t done much and people’s expenditure on these heads increased,” said Himanshu, assistant professor at Jawaharlal Nehru University (jnu) in Delhi. Himanshu helped the committee draft the report. “The revised methodology is more relevant,” Bhanumurthy said.

Not a complete solution

Praveen Jha of jnu’s economics department does not agree. He said in developing countries such as India, high on the global hunger index, allowance for calorie consumption in the food expenditure should be made. According to Patnaik, “ The poverty basket that has been identified talks about basic subsistence levels: basic education in government schools and basic medical facility. It is more a starvation line.”

The current estimate pegs poverty line at per capita rural expenditure level of Rs 15 per day and at Rs 19 for urban areas. Though it is an increase from Rs 12 and Rs 17 in the previous estimates, it falls short of a minimum standard of consumption, Patnaik added.

The new method will not offer a solution for getting a reliable set of price indices, Jha said. “That would need a data system across districts wherein prices vary. We don’t have price indices that takes into consideration change in the consumption pattern. The nss data is inadequate,” he added. The 2010 estimate will use data from the 66th round which will be available in June 2010.