Poverty high in Ghana, but so is school enrollment 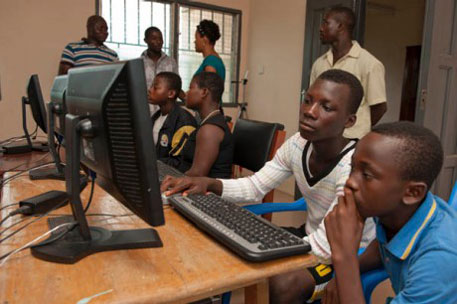 A nationwide household survey has revealed interesting facts about the living standards in Ghana. While a quarter of the population is poor, Ghana performs remarkably well on other welfare fronts, including education and employment.

The Ghana Living Standards Survey (GLSS), conducted by the Ghana Statistical Service, was carried out in 18,000 households between October 2012 and October 2013, reports the Ghana News Agency (GNA). The survey was based on a variety of parameters, including education, health, employment, tourism, agriculture, access to financial services and technology, asset ownership and also households’ perception of governance, peace and security.

During an interaction with the news agency, GSS board chairperson Osei Boeh-Ocansey highlighted some of the key findings of the survey. According to him, school attendance in Ghana for children aged between 6-11 years was pretty high: while boys had an enrollment rate of 93.3 per cent, for girls it was 92.6 per cent. Similarly, the rate of participation in the workforce, among persons 15 years and older, is satisfactory—82 per cent for male and 77 per cent for female. But there is a dark side too: 26 per cent of children aged 5-17 engage in child labour, while 25 per cent are involved in hazardous work.

This was the sixth GLS survey (GLSS6) in Ghana. Ocansey said that GLSS6 was a rich source of information, which should be utlilised for planning, informed decision-making and monitoring and evaluation of development programmes. Other agencies which provided technical and financial assistance to GSS to execute the survey include the World Bank and UN agencies such as UNICEF, the United Nations Development Programme and the International Labour Organization.