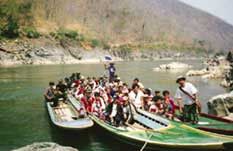 China plans to turn the Nu River in southwest Yunnan province with a chain of up to 13 hydropower stations, into a hydroelectric hub. The government's release of a five-year development plan draft gave rise to a debate about national priorities. It urged a halt to environmental destruction while still pushing for rapid economic growth.

The project is expected to take a decade or more to build and would generate more power than the gigantic Three Gorges Dam. It would displace around 50,000 farmers. But supporters feel the dam would bring electricity and jobs to remote corners of China. Conversely, opponents say it will tear the region's delicate social and environmental fabric without benefitting the locals. To this effect they circulated a petition urging the government to release studies of the dams' environmental impact. However, officials have been reluctant to release these studies.