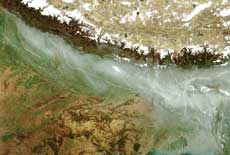 uncontrolled emission from poorly managed thermal power plants in northern and eastern India is the main source for the haze that envelops the Indo-Gangetic plains during winter, shows a new study. The region extends from Rawalpindi in Pakistan to Rangpur in northern Bangladesh.

The findings contradict earlier studies that sought to put most of the blame on biofuel used for cooking by the majority of 600 million people living in the region (see 'Poor soil, global warming', Down To Earth, February 28, 2005). Another reason that has been cited for the thick layer of haze is the burning of biomass following the use of mechanical harvesters by rich farmers (see 'What's cooking', Down To Earth, April 15, 2005).

Meteorological data indicates that the duration and thickness of the winter haze has been increasing over the last 50 years. During the 2002-2003 winter, thick smog covered the region for more than 45 days at a stretch.

For the latest study, the Indian Institute of Technology (iit), Kanpur, researchers Anup Prasad and Ramesh Singh with Menas Kafatos of the George Mason University in the us, measured the concentration of aerosols (fine particles like black carbon and sulphates) over the region using satellite data.

They found that the aerosol concentration over the thermal plants was much higher as compared to their immediate surroundings. For instance, in the case of the 240 mw Panki plant in Uttar Pradesh, the aerosol concentration was found to be 15 per cent higher than in its surroundings, which includes the highly-polluted Kanpur city. The study was published online on March 7 in the journal Geophysical Research Letters.

Singh, the lead author of the study, says that India has about 90 coal-based power plants with a capacity greater than 100 mw, of which a large number are located in the Ganga basin. These plants daily use thousands of tonnes of low-grade coal (with 30-45 per cent ash content), which is the major source of emission of carbon dioxide and other pollutants. According to the study, the share of coal in power generation has increased from 29.4 per cent in 1990 to 33.6 per cent in 2000. On the other hand, the use of biomass as firewood in India declined by almost 10 per cent over the last decade, Singh adds.

Though thermal power plants are equipped with electrostatic precipitator filters to reduce emissions, Singh is not sure if the filters are checked or replaced regularly. In addition, there is a large number of old coal-based plants with a capacity as low as 50 mw. These plants have high emission levels because most of them lack requisite pollution control facilities. For instance, a 50-year-old plant in Kolkata used to emit 500-1,000 microgrammes per cubic metre (g/cum). The emission came down only after the plant was renovated in 2001, following which the figure came down drastically to 10-20 g/cum.

According to the Union ministry of forests and environment's State of the Environment Report for 2001, 20 of the 97 pre-1991 thermal power plants had not taken measures to control pollution as of June 2000.

The winter haze not only seriously compromises the health of millions, but can also drastically reduce crop yield. According to Madhoolika Agrawal, professor of botany at the Banaras Hindu University (bhu) in Uttar Pradesh, the presence of pollutants such as carbon monoxide, nitrogen oxides and hydrocarbons, leads to the formation of ozone close to the earth's surface. Unlike the stratospheric ozone, which protects the earth from harmful ultraviolet rays, this ozone can enter the plants through their leaves and hamper photosynthesis, thereby reducing plant growth and crop yield, she said.

Studies by bhu scientists have shown that ozone levels near the surface were between 15-50 parts per billion (ppb) in 1989-1990, but now range between 30-70 ppb. Besides, high levels of ozone now extend to almost the entire year (except January and February), whereas earlier high levels were restricted to about three months (March-May).