Power for the future

The Institute of Plasma Research in Gujarat is working to make power generation from nuclear fusion a reality. 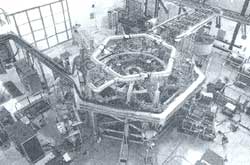 MOST OF us are familiar with only three states of matter -- solid, liquid and gas. But there is another form of matter -- plasma -- that is neither solid, liquid nor gas. Plasma is composed of charged particles -- electrons and ions -- whereas other matter consists of neutral atoms.

Scientists at the Institute of Plasma Research (IPR) in Gandhinagar, Gujarat, are trying to unravel the properties of plasma because of its potential to aid power generation from nuclear fusion. Nuclear fusion can occur only at extreme temperatures, at which plasma is the only state in which matter can exist.

One of IPR's major achievements is the design and construction of a tokamak, a device for confining plasma. ADITYA, as this device is called, "provides Indian scientists a unique opportunity to perform a wide variety of experiments in plasma physics," says IPR director P K Kaw, one of the world's leading plasma physicists.

ADITYA can produce plasmas at temperatures upto 5 million degrees Celsius and is being used for a wide range of experimental and theoretical studies. For nuclear fusion to yield more energy than it consumes, the temperature and density of the plasma must exceed a certain threshold value, called the Lawson criterion. This corresponds to a temperature range of about 100 to 200 million degrees Celsius. Although this limit has not been exceeded by any machine in the world, it is expected that energy from nuclear fusion may become a reality in a few decades from now.

Kaw points out that India should be prepared to harness this source of energy when it becomes practical. "For this reason alone, it is essential to have a pool of trained and qualified scientists working in this field," he says.

Apart from conducting research on the properties of plasma, IPR scientists are working to develop technology to suit local industry. A plasma processing group has been set up at IPR for this purpose. Says P I John, a member of this group, "There is considerable potential for application of plasma techniques in industry."

One example is the plasma nitriding technology to increase the surface hardness of metals. The technology has already been transferred to Indian Plasma System Limited, a local firm, for commercial production.

The technique exposes samples to a nitrogen-hydrogen plasma. The nitrogen atoms diffuse into the material exposed and modify its structure, leading to an increase in its surface hardness. The process is superior to other methods such as gas- or liquid-based nitriding as it gives a better finish and reduces time and saves energy.