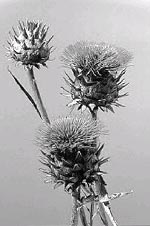 The monster vegetables boast seven-metre long roots and will be used to generate power for 60,000 people when operations in the northern towns of Villabilla de Burgos and Alcala de Gurrea begin in two years.

According to media reports, twin power stations will burn 105,000 tonnes of dried and pulped artichokes each year. To encourage the farmers to sow the plant, the European Union ( eu ) has granted them subsidies.

In Europe, there are a number of biomass schemes, but they struggle to compete commercially with other green energy schemes. An Irish scheme to burn cannabis as a fuel failed last year because it was too expensive compared with wind power projects.