Apart from fitness there is another good reason one should walk: charging mobile phone. Mandar Tulankar, an engineering student in Nagpur, has designed a charger that fits into a sports shoe and charges cell phones simply by the energy generated by walking. He talks to Aparna Pallavi about his innovation 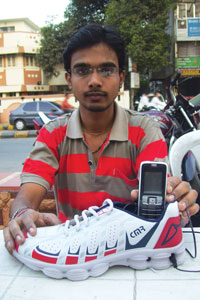 What is the concept behind the shoe charger you have devised?

Peizoelectricity. I had read that piezo crystals found on magnetic plates in stereo speakers produce electric current when sufficient pressure is applied to them. The device which I have made also involves peizo crystals mounted on a good conductor metal plate placed within the heel of a shoe, which generates a eight to nine volt current every time a person takes a step. Intricate circuits transfer this current to an in-built battery, to which a mobile phone can be plugged.

How many steps do we need to take to completely charge the mobile?

Three to four thousand steps or a 5-6 km walk can generate enough electricity to charge the mobile twice. Charge also depends on body weight. Body weight is directly responsible for the amount of pressure on the crystals. If the pressure is higher, the electricity generated is more.

How much power does it save?

Power saved per full charge is equivalent to the power consumed by a 50-Watt bulb in an hour. The power generated by this device is eco-friendly, as the only input is pressure of human feet. There is no manufacturing needed because plates already available in the market are used. Also, the power thus produced does not generate any heat.

It is a very cost-effective device. A pair of shoes fitted with a charger costs Rs 700, and if the charger is fitted into your old shoe, the cost is just Rs 200.

What has been the response to your device?

I started marketing the device through my company Kalpavriksha Angels Research and Development Pvt Ltd, from December 21. I have already sold 1,000 pairs. The product is generating most interest with young people. Another section interested is people with travelling jobs like salesmen, who need their mobiles charged all the time.

What more do you plan to do with peizoelectricity?

I already have a national patent on the device based on peizo crystal-based power generation. It can be fitted on a larger scale in staircases, flyovers, heavy traffic roads or even dance-floors in pubs. I have sought permission to install the device in joggers’ track in the Children’s Traffic Park in Nagpur. I will use the power so generated to light the park.