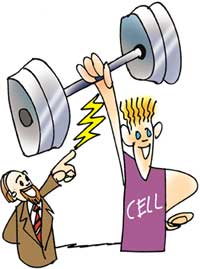 Researchers at the Johns Hopkins University in the US have discovered a genetic switch that is crucial to cell survival. They found the gene HIF-1 controls the rate at which cells are supplied energy and even helps them cope with the absence of oxygen.

A cell's energy demands are met by two major types of sugar (glucose) using machines similar to the two types of engines (internal combustion engine and an electric engine) in a hybrid car. One process uses the mitochondrion, an organelle that breaks down the glucose using oxygen. The other, called gylcolysis, does the same thing, though less efficiently, in the absence of oxygen.

The mitochondrion works as the internal combustion engine that needs ample oxygen for its operation. But this process also generates pollutants or toxic molecules.

When cells are starved of oxygen -- as during exertion or trauma -- HIF-1 shifts energy generation to glycolysis. Scientists had long -- and erroneously -- believed that mitochondrial energy production ran down on its own due to lack of oxygen. "The unexpected discovery is that this genetic switch actively shuts off the mitochondrion under low oxygen conditions, apparently to protect cells from mitochondrial toxic pollutants," said Chi Van Dang, one of the researchers. The switch appears to be a potential target for cancer drugs, he adds. A report on the work, done with mouse cells, appeared in Cell Metabolism (Vol 3, No 3, March 7, 2006).