Even remote areas can be electrified through biomass gasification 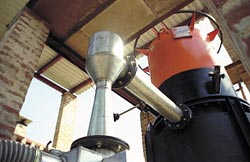 the Lok Sabha cleared the Central Electricity Bill, 2000, on April 9, 2003. Its final passage is expected to pave the way for wide-ranging reforms in the power sector. Since the provisions of the proposed legislation are technology and supply neutral, it would in effect promote decentralisation -- a catalyst for rural electrification. In this context the significance of biomass gasification cannot be overstated, as it is one of the most efficient and economical methods of providing power to the villages (see box: Ray of hope).

"India plans to electrify all its villages by 2007," reveals S P Sethi, advisor (energy), Planning Commission. At a recent national workshop in Delhi on 'Distributed generation technologies for power supply in rural areas', there was near unanimity on the importance of decentralisation in achieving the targets that the government has set itself. "In the past 50 years, centralised power supply has failed miserably," feels H N Sharan, head of Desipower, a Bangalore-based organisation that installs and operates gasifiers. "The conditions are just ripe for the merger of centralised and decentralised projects in India," he adds. "Private players such as cable tv operators and cooperatives can start generating and supplying electricity. Even panchayats can join in," suggests Arvind Jhadav, joint secretary, Union ministry of power (m o p ).

It may be noted that as per government estimates, more than 80,000 villages in the country are yet to be electrified. Of these, about 18,000 have been identified as being too remote to be connected by the grid supply. For many of these rural areas, decentralised biomass-based generation is the key to electrification. What's more, the process eliminates almost all the environmental pollution associated with biomass burning.

On the financial viability front, gasification is on a par with, or even cheaper than, other renewable technologies. "While solar power generation stands at Rs 40 crore per megawatt (mw) today, the wind and microhydel processes are cheaper at about Rs five crore per mw. For biomass, the cost works out to approximately Rs four crore per mw," reveals S Dasappa, a scientist at the Indian Institute of Science, Bangalore. Experts concede that there are a few snags in implementing the technology. At the same time, they maintain that the benefits far outweigh the drawbacks.
Biomass comprises miscellaneous matter such as wood chips, twigs, rice husk, mustard husk and bagasse (sugarcane waste) that can be used as raw material for gasification. The country's predominantly agrarian nature ensures that these items are available locally and in abundance.

"Under biomass gasification, solid agro-residues are broken down into a gaseous fuel through thermochemical conversion. This gas is utilised to generate power," points out Dasappa. "In other words, a traditional, low-quality fuel is turned into a modern-day energy carrier -- combustible gas," explains B C Jain, chief executive officer of Ankur Scientific Energy Technologies Private Limited, a gasifier manufacturing company based in Vadodara.

"The gasification process involves partial combustion of biomass. This occurs when oxygen supply is less than adequate for combustion of biomass to be completed," Jain informs Down To Earth . Since biomass contains carbon, hydrogen and oxygen molecules, complete combustion would produce carbon dioxide and water vapour. Partial burning produces carbon monoxide and hydrogen, which are combustible gases. The gasifier is the chemical reactor where drying, heating, partial oxidisation and reduction of biomass take place.

Gasification-based systems function well within the stipulated emission standards. For instance, a 200-kilovolt ampere (kva) gas engine releases only up to 0.7 grammes per mega joule (g/mj ) of oxides of nitrogen as against 2.22 g/mj -- the limit specified by the Central Pollution Control Board . Whereas the accepted emission levels for hydrocarbons and particulate matter are 0.3 g/mj and 0.2 g/mj , respectively, the gas engine emits less than 0.005 g/mj in both cases.


Amongst all the different types of biomass, agricultural residues are one of the most important sources of gasification. They are easily available even in remote areas. Estimates put the annual production of these at 370 million tonnes (mt), excluding bagasse. At present, there is a surplus of about 150 mt of biomass after it is utilised as cattlefeed and raw material for construction and industrial works. In terms of power potential, this surplus translates into approximately 16,000 mw.

A considerable amount of biomass is used as nutritious cattlefeed (like mustard husk). "Our emphasis is only on those residues which cannot be used as cattlefeed. Many of our projects have shown that a small plot of land can generate adequate biomass and actually add to the green cover," asserts Jain.

"If exploited fully, it could match the conventional power generation capacity -- approximately 10,000-15,000 mw from the existing surplus agro-residues, and about 60,000 mw from degraded land utilisation," avers Dasappa. "Biomass availability is unlikely to be a major issue in the context of rural electrification because merely small communities' limited power needs have to be catered to. Actually, biomass requirement for power generation could well be less than 10 per cent of the amount being used for cooking," says Jain.

Many experts, however, feel that making accurate estimates of biomass availability is not an easy task. "There are often wide variations in figures pertaining to biomass stocks on account of imperfect forecasting techniques, inadequate allowance for utilisation patterns and not factoring in deviations in moisture content," says K Krishnan, chairperson, Malavalli Power Plant Private Limited, Bangalore. Krishnan feels estimates of biomass availability may sometimes have an error factor to the extent of 30-50 per cent.

Currently, biomass contributes to about 40 per cent of the total energy consumed in the country. Only about 22 mw out of this is met by the 2000-odd gasifiers that are in operation, according to the estimates of the Union ministry of non-conventional energy sources (mnes).


What then would it take to realise the full potential of biomass gasification? "The basic policy change needed to facilitate rural electrification is that the government must resolve to make the initial investment. This should not be a problem because the authorities have done so in the urban and industrial sectors," says Jain. What is also required is ridding these decentralised micro-projects of complicated procedures and stifling controls, he opines.

Abhay Mishra, executive director (finance), Rural Electrification Corporation, concurs: " D ecentralised generation systems have to be kept out of the purview of both the Union and state governments." He adds: "The single biggest factor affecting the feasibility of biomass gasification is fixing of tariffs. Local entrepreneurs who set up the system -- not state electricity boards (seb s) -- should be granted the freedom to decide the rates."

Government officials agree that an overhaul is overdue, and are said to be evincing a keen interest in carrying out structural alterations. "We will formulate a financial framework to channel funds to the local level," promises Jhadav. If the atmosphere does indeed become conducive, those associated with biomass gasification projects in the country are confident of delivering the goods.

"Today, if someone asks whether the biomass gasification community in India can electrify thousands of villages, our answer would be 'yes'. As a matter of fact, we can do it in a much better manner and provide grid quality power, as compared to conventional methods," declares Sharan.