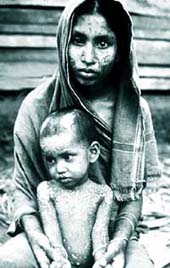 the World Health Organization (who) has consented to genetic modification of the smallpox virus to find better drugs and vaccines against the malady. Though smallpox was eradicated in 1977, the possibility exists of the lethal virus being used as a bioterrorism tool. Taking note of the threat, the un is building a 200 million-dose stockpile of smallpox vaccines.

Samples of the smallpox virus are kept only in two laboratories: the us Centers for Disease Control in Atlanta and the Russian State Research Center for Virology near Novosibirsk, says a who report. In 2003, us scientists wanted who 's permission to insert a "marker" gene for a fluorescent protein from jellyfish into the virus. This could enable quick screening of potential antiviral drugs. If a drug is unable to kill the virus, they will show up as flashes of fluorescence. who had initially opposed the idea, but has now relented. This recommendation would be considered at the World Health Assembly in May, 2005.

But, Donald Henderson, Centre for Biosecurity at the University of Pittsburgh, warns that tinkering with the virus might accidentally produce a more lethal form of the disease.