By A Dutta & Nidhi Jamwal 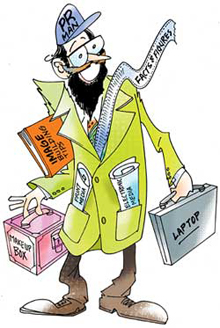 at the fag end of the monsoon session of Parliament last year, 28 parliamentarians and politicians, including veterans like Motilal Vohra and Natwar Singh, sent a letter urging human resources development (hrd) minister Arjun Singh to serve biscuitsand not a hot cooked mealto children under the mid-day meal scheme. The letter was the result of a campaign Media Expressions Consortium (mec), a small public relations (pr) firm based in Mumbai, ran for the Biscuit Manufacturers Association (bma).

The letter-senders were from across the political spectrum, with the exception of the left parties and the Bahujan Samaj Party. Eleven campaigners for biscuits were from Maharashtra, where the biscuit manufacturers have their headquarters. Some also sent the bma proposal as an annexure.


The bma proposal claims a 100-gram biscuit packet could provide 450 calories of energy and cost Rs 3.75, nearly equal to the fund allocation per meal per child by the central and state governments. The proposal gives the game away by saying biscuits have higher recall, thereby hinting at the bonus publicity they would get. Most letters the mps sent read: Biscuits are a healthy packaged nutritious product which can cover many shortcomings of the present system followed by the Mid-Day Meal Scheme (mdms).

According to Lalit Mohan Suhlabaidya, Congress mp from Assam, Representatives from bma came to meet me sometime in September and wanted me to sign a sample letter they had prepared to promote biscuits. They also showed me many letters signed by other mps and politicians saying they supported the cause. When contacted, PS Gadhvi, a bjp mp from Kutch, said he supported the hot cooked meals, but forwarded the presentation as an alternative for problems faced the system currently faced. I received the presentation by post and after going through it, I sent it across to the hrd ministry, he said.


If these are bmas tactics, they are an eye-opener: should political decision making be controlled from the shadows? Here, a pr company took the job, performed it with finesse by giving a socialist face to the campaign. Indeed, pr companieshitherto hired to organise corporate events or build a brand imagetoday have changed. They not only lobby with governments, but provide services such as crisis preparedness, crisis management, litigation support and in some cases even outsource protest (see box: pr is legit).

pr companies today are also into community relations; they assemble coalitions of like-minded third party endorsers (villagers, political or industry groups) who deliver the clients message to the desired target audience. In the last few years, several Indian companies have had to relocate their projects in the face of opposition from local communitiesThrough the use of market research and traditional communication techniques we involve interest groups and call communities to action. Such coalitions help create credibility for our clients so they have a legitimate voice in government and a chance to influence policies that affect their futures, reads pr firm Adfactors website. Adfactors used this method to execute the stiffly-opposed Konkan Railway project in the early 1990s. To understand their methods better, Down To Earth (dte) got in touch with Adfactors and, as demanded, e-mailed a list of questions, but despite repeated efforts both Madan Bahal, managing director and J S Sai, associate director of Adfactors, were unavailable for any comment.

Similar lobbying by tobacco companies have managed to keep pictorial warnings, to have been implemented in February 2007, off cigarette packets, alleges Hemant Goswami, who leads an anti-tobacco ngo called Burning Brain Society: The Cigarettes and other Tobacco Products (Packaging and Labelling) Rules 2006 has not been implemented yet. The tobacco companies, Goswami adds, use pr resources, in-house and outsourced, as well as its legal department to lobby against such laws. In 2005, Goswami informs, Indias biggest cigarette company, itc, paid Rs 4.62 crore as political donations to 18 major political parties, with the Congress and bjp taking the lions share of Rs 1.44 crore and Rs 1.37 crore, respectively.

pr companies openly flaunt the fact that they have connections with government. A consultancy named dta, for instance, calls itself a public affairs and corporate advocacy enterprise. Its website has a special section on government relations where the company formulates strategies that assist corporations manage dialogue with the elaborate and multifaceted Indian establishment at both the Central and State levels (see box: Under the influence).

When dte contacted dta, its managing director, Deepak Talwar, promised an appointment but did not oblige. The company claims in its website that it has managed to counter local opposition to the entry of mncs in the fast food sector and obtained licences for opening them. The mnc in question had a problem because it had a beef-centric menu, not acceptable to religious groups. A sustained programme addressed opposition from pressure groups and parliamentarians, says the website, bringing out a turnaround in their perceptions.Crisis management is one of the foremost requirements for clients today. Look at some of the controversial cases, such as the presence of worms in Cadbury chocolates, or the presence of pesticides in soft drinks or the killing of Shahrukh Khans security guard, and you will understand the importance of crisis management, says P Das, a Mumbai-based pr executive.


Media Expressions Consortium (mec) also handles among other clients companies such as United Phosphorous Limited (upl) and Excel Industries Ltd, both pesticide manufacturers that have faced a lot of negative publicity in the last few years. mec has taken up cudgels for a upl -sponsored ngo called Centre for Environment and Agrochemicals (centegro), whose ostensible agenda is to promote healthy agricultural practice using chemicals, but in reality promotes pesticide use, and fights ngos that oppose the flagrant use of pesticides. Raju Shroff, who heads upl, also owns centegro. mec has been outsourced by centegro to picket outside the Centre for Science and Environment (cse) office since the first week of April. The reason?

A February 2001 study cse published on serious ailment caused by pesticide endosulfan being sprayed on cashew plantations in Kasaragod district. The protesters told dte they were paid Rs 500 per day to stand outside the cse office. When dte contacted Rajesh Jain, the owner of mec, he said: We are not involved in the protest and people standing outside cse do not belong to Expressions.

Ironically, on April 2, the first day the picketers stood in front of the cse office, Jain was himself present and was photographed taking a glass of water from a cse staffer. Jain admitted to the fact that he was present, but said he was not there on behalf of his company, but as an individual citizen of the country who wanted to protest against the ngo.