Working out the details and convergence with other programmes like rural job scheme will take time, say officials 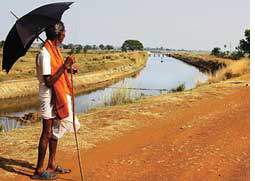 One of the ambitious schemes of new government of providing irrigation facility to all farms may not take off before financial year 2016-17. The programme, Pradhan Mantri Krishi Sinchayi Yojana (PMKSY), was announced in this year’s budget and Rs 1,000 crore was allocated for it. This allocation may be further enhanced to Rs 1,500 crore, according to information.

The Union water resources ministry, which was made the nodal ministry for implementing the programme, gave a presentation to the Prime Minister’s Office (PMO) on the scheme last week.

PMKSY is for those regions which are not covered by earlier irrigation programmes like the Accelerated Irrigation Programme Benefit (AIPB), which is meant to provide irrigation to the north-eastern states, other hilly states like Uttarakhand, Himachal Pradesh and Jammu&Kashmir, integrated action plan (IAP) districts or districts affected by Left extremism and drought-prone areas.

According to presentation, under PMKSY, which is for general regions and areas where fertile land areas can be irrigated, 125,000 ha of land can be covered every year.

The scheme is fully centrally funded, and would converge with rural development schemes like Mahatma Gandhi National Rural Employment Guarantee Scheme (MGNREGS) and other schemes of agriculture ministry and land resources department.

“The irrigation structures can be developed under MGNREGS,” said a senior official of the water resources ministry on the condition of anonymity.

The finance ministry, however, has raised concern about PMKSY, citing no substantial outcome of earlier irrigation schemes. “The water resources ministry has responded by saying that this scheme is meant for fertile land and so will definitely help in raising income of marginal and small land holding farmers,” said the official.

“Now the ministry has proposed to divert money from this account instead of a separate allocation,” the official said.

The proposed allocation year-wise is as follows:

The reason for probable delay for the implementation of programme is procedural delays. “Even if the Cabinet gives its nod to the programme, issuing guidelines and asking states to provide detailed project report will take another year,” said another officer.

“Even planning for how PMKSY will converge with MGNREGA and other agriculture schemes and watershed development scheme of land resources department, and how panchayats would be involved in planning is taking time. Even we don't know whether this scheme will be with the water resources ministry or go to some other ministry,” said an official.