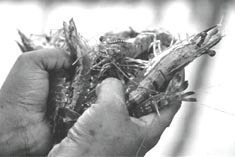 chilika lake, Asia's biggest saltwater lake, situated in Orissa is still awaiting a complete ban on prawn farming. Despite violent conflicts between traditional and non-traditional fishermen over prawn farming, the state government has not done much to solve the crisis. Prawn culture has destroyed the state's mangrove forests, which guarded the coastline against storms and cyclones, and jeopardised the livelihood of lakhs of fishermen and agriculturists.

With the prawn mafia still doing brisk business, doubts are being cast on the integrity of the state government. The previous Congress government of the state had drafted an ordinance to ban prawn farming but it was never legislated. The present government's hesitation to ban prawn farming is being question by several environmentalists, including Banka Behari Das. According to him, the prawn culture flourishes because of a mafia-bureaucrat-politician nexus.

Disgusted with the careless attitude of the government, the traditional fisherfolk of the area are planning to launch a agitation and they will be supported by the Communist Party of India.