Precinct in the sand

A university of desert knowledge 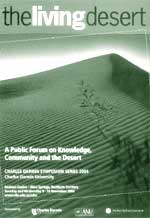 When the literature of a university symposium begins with "The desert is a European idea", you know it means business. Especially if you come from the non-European universe. The Charles Darwin University (cdu) of Darwin in Australia is embarking into a new territory in its bid to rejuvenate itself, improve and diversify its profile. In association with the Australian National University and the government of Australia's Northern Territory, it plans to set up an ambitious desert knowledge precinct in the heart of the Australian desert in Alice Springs. To set the agenda for the precinct, the university used its annual event, the Charles Darwin Symposium Series, to talk about "the living desert".

A compelling reason to have the precinct in Alice Springs is the growing acknowledgement in Australia of the status of the aboriginal people. Indigenous people of the continent, they have faced the brunt of European colonialism for more than two centuries. Their lands have been taken away and they have been reduced to second class citizens in their own land. They are a mere two per cent of Australia's population; compared to other indigenous peoples of the world, their leadership is quite poor in addressing their pressing survival and development concerns. It was only in the historic 1992 Mabo judgement that Australia recognised as common law the right of the aborigines to their traditional land -- what is now called a native title claim.

In fact, the desert knowledge precinct will come up on the land owned by Betty Pierce and Patty Dodson, both of the aboriginal Arrernte people, the traditional owners of Alice Springs. The two women are among the very few aboriginal people to win native title claims to their land. In a beautiful gesture, the women have given away the land of their ancestors to the university for setting up a centre that would bring the knowledge of the world to address the most pressing concerns of the aboriginal people.

In recognition of this imperative, the university invited people from desert regions across the world to work out a roadmap, apart from academicians, government representatives, lawyers and eminent aboriginal citizens. The papers presented at the symposium tried to encapsulate the rich knowledge of people from deserts as far away as Palestine in West Asia, Arizona in the us, and the Thar in India. Donna Craig, chair of desert knowledge at cdu, spoke of setting up an international knowledge network that can provide policy advice to Australian governments. The presence of government representatives showed the willingness of the government to draw from this pool of knowledge.

The symposium also saw a lot of uncomfortable questions getting raised. There were people who objected to the limited funding from universities to study aboriginal languages. Others spoke of the dismal performance of aborigines in the formal education system, as well as traditional knowledge and intellectual property rights issues.

The industrialised countries have a reputation of having governments that work. That is what raises hope that there will be a vibrant knowledge centre that can effectively cater to the pressing needs of the most exploited people on the continent.