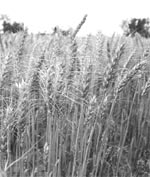 the concentrations of greenhouse gases such as carbon dioxide ( co 2 ), methane and nitrogen in the atmosphere have been steadily rising over the last few decades. This is likely to go up unabated. These gases are increasing at the rate of 1.5 parts per million per year and, if this goes on unchecked, it may result in warming of the atmosphere by 1.50 c to 4.50 c by the year 2030.

The rise in temperature will lead to melting of the glaciers and polar ice caps thereby rising of the sea level. This will threaten arable lands in countries that have a vast coastline, including India. The potential risks to agriculture includes shifts in agro-ecological zones and decrease in crop productivity. While the rapid change in climate may benefit certain species of plants and animals, others will be unable to adapt to the change and may face extinction ( Farmer & Parliament , Vol 36, No 11).

It is widely accepted that a rise in temperature and co 2 concentration in the atmosphere is likely to have a positive effect on certain crops. co 2 enrichment increases photosynthesis and plant productivity significantly. This has been observed in crops like soybean, wheat, paddy and maize. For example, the rice grain yield increased from nine tonnes per hectare (ha) to 11.6 tonnes per ha in the dry season when co 2 enrichment was provided for 30 days. Besides, the use of water by the plant also decreases. Higher levels of co 2 increase photosynthesis but decrease transpiration rate per unit area of leaf.

However, this is just one aspect of the impact of global warming on crop productivity. At the other extreme, increasing levels of greenhouse gases could spell doom for many other species of plants.

Experiments have shown that depletion of the ozone layer increases the exposure of plants to ultraviolet rays, which slows the growth of plants, prevents ripening of crops and, in some cases, accelerates genetic mutation and affects the process of photosynthesis. Seedlings of tomato, radish, cucumber, green beans, cotton and millet exhibit abnormal seedling growth under elevated uv radiation.