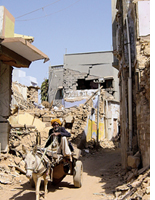 there could be a link between disturbances in the ionosphere and the Earth's magnetic field, and earthquakes. Such disturbances preceded the quake that struck Gujarat on March 7, 2006. A study says the disturbance were caused by the changes in the electromagnetic radiations over the Earth before the tremors occur.

Scientists are divided over whether this observation can be used to predict earthquakes. Some claim the study helps predict earthquakes better than seismological methods like field studies. "Electromagnetic radiations affect the ionosphere and are prominently detectable over a greater area. Thus it can be an effective non-seismometric prediction method," says B R Arora, director of the Wadia Institute of Himalayan Geology. Archana Bhattacharya, director of the Indian Institute of Geomagnetism (iig) is sceptical. "The mechanism has not yet been understood. It cannot yet be established as a prediction method," she says, adding that electromagnetic radiations are often influenced by external factors and only a multi-parameter analysis with the help of global positioning system can be foolproof. The findings were published in the July issue of Current Science (Vol 93, No 1).

Scientists from the University of Athens first came up with the idea that electrical and magnetic activity in the ground could predict the location, time and magnitude of earthquakes. In 2002, on the basis of pre-recorded data, the Earthquake Prediction Research Center at Tokai University in Japan reported that unprecedented changes in the earth's electrical and magnetic fields over Japan's Izu islands in March 2000 was followed by a series of earthquakes in June 2000.

In spite of the efforts, earthquake prediction still remains highly probabilistic. As Bhattacharya points out, most of the studies conducted so far have been post-quake studies. An exception is the earthquake triggered off by the Koyna reservoir in Maharashtra. It was predicted with remarkable certainty by monitoring seismic activities. A report in Current Science (September 25, 2007) shows an earthquake of (more than 4 in the Richter scale) was forecast on May 16, 2006. A quake of magnitude 4.2 hit the area on May 21, 2006.

The Wadia Institute and iig have been monitoring nine methods for prediction of earthquakes under a 'mission mode programme' of the department of science and technology of the union ministry of science and technology. Radon detection in water is also considered an effective non-seismic method in which the inert radon gas is emitted from the cracks on the earth before an earthquake strikes.