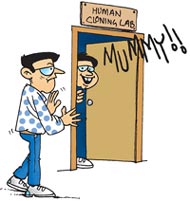 The ethical implications of human cloning have spurred the un General Assembly's legal committee into action. The panel is laying the groundwork for an international treaty that would ban the creation of human clones. In this regard, a working group has already been assigned the task of drafting the clauses of the pact.

After conducting meetings, the group has started listing out the legal issues to be covered by the new treaty. The committee had initially held weeklong talks in February to explore various approaches. All un member-nations are free to participate in the deliberations.

The assembly voted last year to draft a treaty at the request of France and Germany after Italian fertility specialist Severino Antinori announced that he would clone a human being. But the drafting process is expected to take years. The idea of fashioning human clones in a laboratory continues to generate outrage around the world, despite the promised benefits of some avenues of research.