A group of scientists is attempting to collect and store genetic material from various tribes on the verge of extinction in an effort to preserve their characteristics. 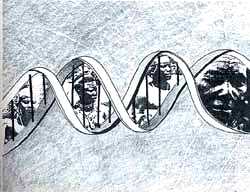 SOME WESTERN universities and scientists have formed a consortium -- the Human Genome Diversity Project (HGDP) -- to collect and preserve genetic material from several tribes and communities worldwide that face extinction. Each ethnic community may have a slightly different genetic composition and scientists believe these differences could some day prove to be invaluable to medicine.

In its initial five-year effort, which will begin late in 1993 or in 1994, the HGDP will collect DNA samples from at least 400 of the more than 700 indigenous communities whose survival is threatened. Collecting blood, tissue and hair samples will cost between $23 million and $35 million. The project is supported by the US government's National Institutes of Health in Maryland and is linked to the Human Genome Organisation -- the multinational, multibillion dollar initiative to map the entire human genetic structure.

During its initial stint, the HGDP plans to collect samples from 10,000-15,000 people at an average cost of $2,300 per sample. White blood cells from each sample will be preserved at the American Type Culture Collection in Rockville, Maryland. The human tissue taken from the inside of the cheek and hair samples will be used in shorter-term studies.

Meanwhile, citing Western patenting of plant germplasm collected from the South, a communique brought out by the Rural Advancement Foundation International, an NGO, warns the human genetic material HGDP is gathering may be patentable in USA and Europe even without any further research and can be used by these countries for their profit.

Apprehending such misuse, RAFI suggests the HGDP halt collecting samples, convene a meeting with the World Council of Indigenous Peoples and other international organisations that look after the interests of indigenous people and take up such activities only with their consent.