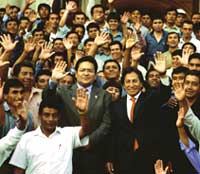 Peru's president Alejandro Toledo recently stirred a heated debate on environment versus economy by rejecting a new General Law on the Environment for the country, which had been approved by the Congress. Toledo cited economic grounds for refusing to enact the bill and returned it to the Congress. He said the law would discourage private investment, hike production costs and compromise the competitiveness of companies.

The Congress has the choice of either incorporating Toledo's suggestions into the bill or adhering to the original version. It can also postpone the matter indefinitely. The legislation enjoys the support of the country's lawmakers and environmentalists, who believe it is high time Peru braces up its act regarding environmental policy. "Failure to enact the law would condemn us to continuing non-compliance with the environmental quality standards recommended by the World Health Organisation," Elvira de la Puente, member of the congressional environmental committee, was quoted as saying by Tierramrica.