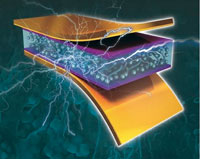 HOW often do you bang the remote to get it working and run for chargers once the mobile battery is dead? Well, soon there could be an end to all this frustration, if researchers from Korea have their way. They have designed a flexible nanogenerator from ceramic materials that can produce energy under external mechanical stress.

Nanogenerators are a self-powered system that convert mechanical energy into electrical energy and hence find wide-scale use in electrical appliances. But nanogenerator technologies in use have drawbacks like size-related constraints, high-cost and complex process.

The new nanogenerator technology utilises piezoelectric material. These materials produce electricity when bent, stretched or pressed. To build the nanogenerator, the scientists dispersed nanoparticles of barium titanate along with carbon nanomaterial in a chemical matrix to produce nanocomposite. The nanocomposite was cast onto metal coated plastic substrate and cured in an oven.

When pressure was applied the nanogenerator produced about 1.5V electricity. By storing the produced energy in capacitors, it can generate 2.37 V, large enough to drive standard light-emitting diodes.

The scientists reveal that their nanogenerator is better than their predecessor. “Our generator is simple, low-cost and has a large surface area,” states the lead researcher, Keon Jae Lee from Korea Advanced Institute of Science and Technology.

He adds, the results expand the feasibility of self-powered energy systems for application in consumer electronics, sensor networks, biomedical devices and energy harvesting in indoor environments. The research was published in the May issue of the Advanced Materials.

Another novel application of nanogenerators that has been creating much ripples globally is their use in clothing. These tiny nanogenerators, similar to those developed by the Korean team, can be incorporated into clothes and converted into self-powered generators that will produce energy by just the movement of the person wearing it. This energy can in turn be used to power small portable devices such as mobile phones, mp3 player.

However, there are some limitations to nanogenerators. They produce very small amounts of power. “We believe that this will be solved in a short time, since a research is under way to solve this issue,” admits Lee.