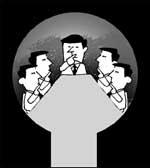 "CHEMICALS are presumed to be safe and to be innocent until they are proven guilty." The startling statement transforms into a shocking revelation as Bill Moyers sets out to ruthlessly expose the mechinations of powerful chemical industry in the United States which has hidden secrets for almost half a century.

Trade Secrets: A behind closed doors report on the chemical industry traces a trail of how this industry has suppressed and manipulated information and data regarding health and environmental impacts of the chemicals they produce. One after another there are horrifying tales of workers contracting deadly diseases while producing chemicals. And when some companies did discover the dire consequences of close contact with these chemicals, all they did was to keep silent for fear of losing out on profits. The film goes to uncover the deadly nexus between industry and mainstream politics.

For almost 50 years, chemical companies and their Washington trade associations kept records - including confidential letters that discuss evidence of the toxic effects of chemicals, and minutes of board meetings that record frank talk about strategies to defeat or delay regulation of their products.

Dan Ross worked for 23 years with vinyl chloride, before he died of a rare form of brain cancer at 46. His death, Moyers explains, resulted in a 10-year-long legal battle charging the chemical industry and its Washington trade association with conspiracy to conceal the risks of working with the chemical that Ross' wife is convinced, caused his cancer. It was this case which led to the discovery of a room full of papers, correspondence and records from major chemical companies by attorney William Baggett junior, who waged the legal battle for Ross. The case has now been settled but the long process of legal discovery eventually produced more than a million pages of once confidential documents.

Over the years, mounting evidence initiated citizen's movement demanding information from the chemical industry. But chemical industry made a concerted effort to limit regulations. And this was done by influencing the decision-makers by funding elections. Since then, the chemical industry has contributed at least US $117 million to help elect senators, congressmen and presidents.

The film ends with an open discussion among representatives of the chemical industry, environmentalists and public health experts. It is ironic that chemical industry representative was given the last word and sad when he closed it by saying, "I want to say that we are committed to continuing to improve our environmental health and safety performance. I think you all know that what happened 40 years ago is no reflection of the kind of industry that we represent today."