Study reveals that a new herbicide, Roundup, is also toxic 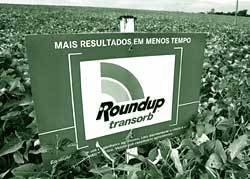 a herbicide, Roundup, based on the chemical glyphosate, is being promoted by multinationals as a solution to the problem of toxicity from pesticides. But a study by French scientists published in Environmental Health Perspectives (Vol 113, No 6, June 2005), shows both Roundup and glyphosate can be toxic to human placental cells. The chemicals affect the cells even at concentrations far below than what farmers use.

Roundup is extensively used worldwide, with most genetically modified plants designed to tolerate it. But its residues can enter the foodchain. Some farm workers using glyphosate reportedly have had pregnancy problems, but these adverse effects have never been established in vitro. Therefore, researchers from the University of Caen decided to study the effects of both Roundup and glyphosate on a type of placental cells called jeg3.

Since the recommended level of agricultural use for Roundup is 1-2 per cent in water, the researchers exposed jeg3 cells for 18, 24 and 48 hours to concentrations from 0-2 per cent of the herbicide. It was found Roundup reduces jeg3 cell viability (survival rate) at least twice more than glyphosate. This effect increased with time and was obtained with concentrations of Roundup 10 times lower than that for agricultural use. The adverse effects became noticeable after a mere 18 hours of exposure.

The researchers conclude by stating glyphosate (and thus Roundup, too) disrupts the enzymic functions of the p 450 protein of the placental cells with concentrations 100 times lower than the recommended use in agriculture. It can also affect the gene expressing the p450 protein. These effects are amplified by at least 0.02 per cent in Roundup because of the presence of other chemicals, called adjuvants, added to enhance its potency as compared to glyphosates. The adjuvants are known to facilitate cell penetration; this should be taken into account in pesticide evaluation, the scientists warn.