Nature's services can no longer be taken for granted 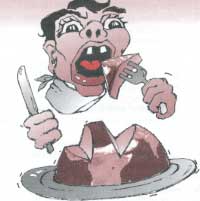 Question: What is the cost of the ecosystem services which nature offers us? Answer: A whopping us $16-54 trillion!

This figure has been arrived at with the concerted efforts of 13 ecologists, economists and geographers who reported their finding in a recent issue of Nature. Remarked Robert Costanza, an ecological economist at the University of Maryland who headed the study, "We come away from this, thinking this is a minimum estimate."

Most of the estimate lies outside the formal markets and is therefore not reflected in market prices, the usual gauge of economic value. Basing their estimates on other published studies and their own calculations, the researchers state that the services that nature's ecosystem provides has for long been overlooked until they no longer exist or are seriously endangered.

For conservationists, in the words of David Ehrenfeld, a conservation biologist at Rutgers University, us, "Common sense and what little we have left of the wisdom of our ancestors tells us that if we ruin the earth, we will suffer grievously." While accepting the results of the new study, he added passionately, " I am afraid that I don't see much hope for a civilisation so stupid that it demands a quantitative estimate of the value of its own umbilical cord."

Nature has for long performed economic services for us. An example is the purification of New York city's water supply by microorganisms as the water percolates through the soil. Now the city plans to spend us $660 million to keep this watershed in good health while the alternative would have been to build a us $4 billion water treatment plant. It is, therefore, necessary, argue the researchers, to calculate and heed the true worth of ecosystem services.

While making economic choices involving nature, people do not take into account the cost of nature's services, feels Costanza. Citing an example, he says that the dollar value of wetlands' flood protection and water cleansing abilities has not traditionally been considered when its area is lost to a shopping centre. This results in a slow but sure depletion of natural wealth. If such costs were reflected in day-to-day transactions, then the society would pay more attention to what is lost when land is 'developed'. States Gretchen C Daily, a conservation biologist at Stanford University, "We cannot wait until we have disrupted the planet's life-support system beyond repair. Once gone, these ecological assets would be difficult to replace; it can take thousands of years to recharge depleted aquifers or replenish topsoil."

While many scientists have lauded the study, a few others have expressed scepticism about its basic finding. "There is no way of knowing how good this number is," said Robert Repetto, senior economist at the World Resources Institute, a Washington based research organisation. "They have made some heroic assumptions. I suppose it is useful for rhetorical purposes. But the number is less important than the fundamental point made by the study that ecosystem services are important; I don't think reasonable people would deny it."

Stuart Pimm, an ecologist at the University of Tennessee, believes otherwise. The study has succeeded in providing "a conservative estimate of what the environment does for us. So often, people concerned with protecting the environment go up against these very highly detailed economic analyses and feel they don't have anything in kind with which to respond." In the study, a particular table lists specific ecosystem services and their supposed value for different types of natural areas and this study is helpful in providing a checklist that national and local policyrnakers can use in attempting to roughly gauge the economic worth of their natural assets, according to Pimm.

What impact could this study have on the thinking of the governments? Daily and others state that government subsidies that distort the value of natural resources in fisheries and logging should be abolished. Also, tax incentives might be given to landowners to protect the long-term assets represented by natural capital rather than using them for short-term gain.

For others, applying traditional economic arrangements to ecosystem services could be another way of gaining an appreciation of nature's services. Graciela Chichilnisky and Geoffrey Heal, economists at Columbia University, using the watershed at New York city as an example, have proposed the selling of investment shares in a given ecosystem. The capital thus raised could pay for preserving the watershed. Returns to investors would come either from a share of the costs saved by not having to build a treatment plant, or, if the investment were private, by actually selling ecosystem services. In this case, clean water would be sold.