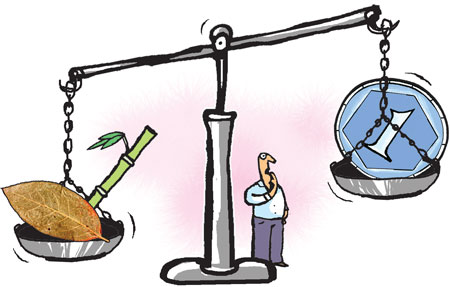 HOW much does a bundle of tendu leaf cost? The question has left the government scratching its head as it prepares to introduce minimum support price (MSP) for minor forest produce (MFP).

Once fixed, MSP promises to increase the incomes of forest dwellers as it would take into account the labour cost, daily wages rate and the market value of the forest produce. Over 270 million people in India are dependent on forest produce for a living, but they have to sell their collection to traders or state agencies at throwaway prices (see ‘Major battle over minor produce’, Down To Earth, November 1-15, 2010).

The government, however, is facing teething troubles in finalising the method for calculating MSP.

A committee, headed by agricultural economist T Haque, was formed in August last year by the Ministry of Panchayati Raj to calculate MSP. The committee was supposed to submit its final report to the government by March end. It is yet to do so.

According to a source in the committee, the panel members had initially proposed that the Commission for Agricultural Costs and Prices, which recommends MSPs for agricultural products every year, should be given the task of calculating MSP for forest produce. But the proposal was axed after a few members contested that harvesting forest produce is different from harvesting crops. “Production cost is the major input in agriculture; labour in forest produce. Besides, production of MFP varies from place to place and time to time,” says the source.

The Haque committee may now recommend formation of a central commission on the lines of the commission for agricultural produce, consisting of experts in forestry and economics, adds the source.

While forest produce might be procured by the forest development corporation, already involved in forest produce trade in many states, the coordination job could be given to the Tribal Cooperative Marketing Development Federation of India, adds the source.

But Shankar Gopalakrishnan of the Centre for Survival and Dignity, a Delhi non-profit working for tribal rights, believes a commission at the Central level may not work. “Due to regional variability in forest produce production, such commissions are required at state level,” he says. According to Sharach-chandra Lele, a member of the National Forest Rights Act Committee, setting MSP “is an attempt to finesse the fundamental right of forest dwellers to own, manage and dispose of forest produce as given in the Forest Rights Act (FRA)”.

On April 11, environment minister Jairam Ramesh wrote to deputy chairperson of the Planning Commission Montek Singh Ahluwalia, saying MSP must be notified for each of the forest produce—tendu, bamboo, mahua flower and seed, sal leaf and seed, lac, chironjee, wild honey, tamarind, gums, myrobalan and karanj. Of these, states currently have monopoly over tendu leaves, bamboo, mahua and sal.

In Madhya Pradesh the price tribals get for collecting tendu leaves does not even equal minimum daily wage, says Anurag Modi of Madhya Pradesh-based Shramik Adivasi Sangathan. “Tribals get Rs 60 for 5,000 leaves. This comes to one paisa for one leaf. A family of two cannot collect more than 15,000 leaves in a day, which means an earning of Rs 180 in a day. The daily wage for two people is Rs 450,” he adds.

In his letter, Ramesh clarified that any monopoly on purchase of forest produce should be removed. The procurement agencies should not only buy profit-making forest produce like tendu and bamboo but also provide MSP for other produces, the letter adds (see ‘State has tendu trade right’, Down To Earth, March 16-31, 2011). Sanjay Basu Mullick of Jharkhand Jungle Bachao Andolan believes once the monopoly is removed, “there is no need for MSP”. “FRA gives ownership right over forest produce to forest dwellers. There has to be no government interference,” he says.

Freeing bamboo from the state
Is bamboo a tree or a grass?
Bamboo sale for bamboo rights
How government is subverting forest right act
Maharashtra muddies bamboo rights