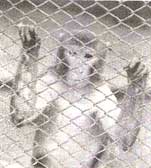 The Union ministry of environment and forests (MEF) is caught in middle of a raging debate over the use of monkeys in the manufacture of oral polio vaccine (OPV). While the Maharashtra government has sought permission from MEF to use bonnet and rhesus monkeys for producing OPV, experts have pointed out that mass killing of monkeys for OPV is an outdated practice.

Using monkeys for producing OPV involves culturing polio virus on tissues extracted from a bonnet monkey's kidney to harvest the vaccine fluid. The vaccine's potency is then tested by injecting it in the spine of a rhesus monkey. Both monkeys are killed in the process. Primatologist Iqbal Malik points out that since 1990 developed countries have employed a more humane in vitro production technology, which uses a continuous cell line from a single African green monkey. Experts also say that the injectible polio vaccine is longer lasting.

Because of the imbroglio, MEF is yet to decide on proposals such as that of the Haffkin Bio-Pharmaceutical Corporation Limited -- a Maharashtra government undertaking -- to produce 50 million doses of OPV every year by using 300 monkeys, and the government of India's Bharat Immunologicals and Biologicals Corporation Ltd's proposal to produce 100 million doses of OPV annually by sacrificing 400 monkeys.